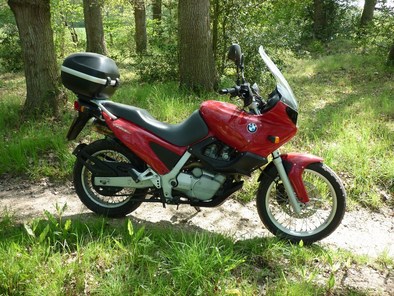 I bought a BMW F650 in 2011, immediately after selling my fifth Yamaha FJ1200. The FJ was bought through Ebay (in Wales) but upon closer inspection it was a little rough around the edges, despite the tough motor.

The BMW was also seen initially on Ebay though this time not in Wales but just under 10 miles from home. I viewed the baby BM and test drove it for a number of miles. Everything felt to be in order, though I had to dismiss what I was riding on the way to view the F650, as it would be pointless trying to compare the two bikes.
One was as smooth as silk, the other a tractor!

The BMW did have many points in its favour though , not least of all its considerably lighter weight and excellent fuel consumption figures.
I made an offer but though it was declined we eventually settled on a price that both the seller and myself were happy with.

I placed my deposit , rode the FJ back home , sold the FJ a week later but went back to collect the F650 just before the FJ had sold.
The bike had just over 31K miles on the clock at the time of purchase , just two previous owners on its 1997 plate and was in very tidy condition. It had led a fairly sheltered life , was well maintained overall and had a feel to it that inspired a reassuring sense of mechanical reliability,

After using it for a few months to work and back and weekend rides I decided the bike was good enough for an adventure to the Alps/Dolomites. I started preparing the bike for its duty, firstly by giving the old girl a partial service. She was running sweet and so limited the service to a full oil change, filters, a cheap chain lubing device, new plugs (twin spark single cylinder) and new fork oil seals.
The Alps adventure would hopefully be taking in some 2,500 miles, at least, and at relatively short notice it was a quite tight budget I needed to stick to. 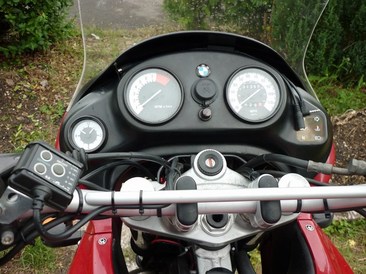 I purchased a set of Oxford Heated Grips due to my own blood circulation problems , which could have created potential problems riding at altitude had I not invested in these, a 12v dc socket was fitted between the clocks , a bullet type video camera mounted just below the fairing and a much larger chain lubing oil reservoir was made up from a Mothercare baby bottle for the gravity fed oiler.

At very short notice I managed to secure a set of BMW City Panniers and Top Box from an online forum, but upon receiving them I felt they were more like lunch boxes than touring panniers. I think the clue was in the word 'City'!
I set about modifying the pannier rails to accept some BMW Touring panniers but after fitting them I decided that these had gone in the opposite direction, excessively! They were simply too big and increased the overall width of the bike far too much.
With our adventure about to start the following morning, I ground away the modified and welded on pannier rail extensions and reverted back to the City Panniers. They were small but they looked right. They would have to do! 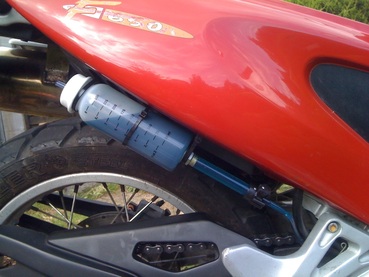 Preparations were completed late in the evening whilst Jo took care of other matters , such as getting the clothing for both of us packed in the best and smallest package possible within the vacuum bags that would have no alternative but to squeeze one each inside of each of the panniers , a his and hers.
The top box would be for minimal tools, large maps, first aid kit and other small items. The tank bag would be home to electrical devices , spare gloves for me, the current map as well as a series of Michelin maps for Austria, Switzerland and Italy, a guide book for the Alps and other small odds 'n' ends.

By the time was bike fully loaded with travelling gear it became quite clear how little room was left for both rider and pillion. Jo struggled to mount the F650, being short in the leg, and everywhere else for that matter!

The final addition to the bike would be a recently purchased sheepskin for a butt-comfort aid. 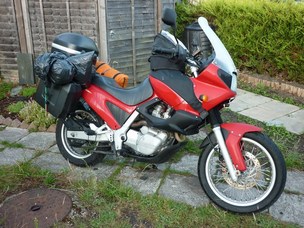 The F650 was loaded up and ready to set off on a fine Saturday morning.
We took the Dover/Calais ferry crossing and headed toward our hotel accommodation in Metz, Germany. We made a couple of stops en-route to Merzig to stretch and exercise our legs for a few minutes or so and took one longer rest just outside of Luxembourg on one of the ring roads.

I made a point of filling the tyres with a Slime type product in case of any punctures and added a pair of fork stanchion protectors.
The tank bag was also purchased from the same person selling the City Panniers and worked very well!
A pair of sleeping bags and a very small tent were added to the list , all of which was making it very difficult for the vertically challenged Jo to climb aboard. 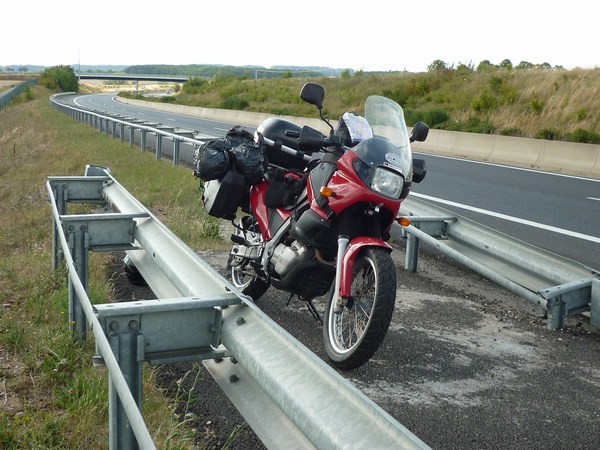