At 06:09 I am dressed and take a seat upon the now removed camera case-cum-top box whilst a morning brew is seen to. The rain had stopped, though looking overcast and ready to break into rain again at any moment.
The bike is looking quite well travelled with the dirt covering from previous off road tracks and the covering of mud from my arrival at the campsite the previous day.
A fresh invasion of gnats were in the air - no doubt waiting and planning their ambushed assault on me the moment I left the tent.
I could hear the traffic behind me on the Autostrada , some 100 metres from me on the raised roadway that passed over the common land. Other than this the air was filled with the sound of early birds and grasshoppers.

I find it very difficult to start a new day without a tea at home. Here it didn't have to be tea , as long as it was hot. I had brought Coffemate with me for the adventure because carrying milk in this heat would have killed it off very quickly - just like it did with the cheapskate margerine I bought in Vars. It didn't see out the day yesterday before it had leaked from its container and poured like any thin liquid does when it was tipped up. It looked positively vile , and probably was!

I packed up camp , turned on the GoPro for some reminder footage of my departure , as I had done for my arrival too ,and set off. I had been riding for less than a minute before I had my second off of the whole adventure.
The dirt track I arrived along had a small mud patch, perhaps a bit longer than the wheelbase of the GS, which had a water covering on one side and thin mud the other. On arrival I rode the water side of this patch , upon departure I made the mistake of riding the mud side. The mud didn't look particularly problematic upon approach but as soon as it filled the tread of the front Annakee hoop, one full revolution was all that was required before traction had vanished completely.
There was a choice discrepancy of perhaps 12"-18" between taking the puddled route or the mud , but as I say, I got it wrong this time.
Me and the GS were down for the second time , both occasions at very slow pace, only this time there would be consequences!

The GS was resting at an angle and supported mainly by the left hard case, which my foot was beneath! I managed to free my foot and in an instant the pain made its presence felt. Damn this hurts ... and it hurts a lot! The air would turn blue, very blue in fact! I took three breaths and started to lift the GS ..." up ,up, come on up ya fuckin' bitch"!
As the day wore on the pain would intensify, and the limp more pronounced.

(Apologies that the video/audio sync got lost in translation , some 30 odd seconds between them! Technology eh?)
http://www.youtube.com/watch?v=zC2BUwiBT3E

I remounted and headed toward Susa to pick up the D1006 toward Lac du Mont Cenis. At Mont Cenis I pulled in to  a restaurant parking area overlooking the artificial lake - Lac du Mont Cenis. The temperature had dropped to 9.5 degrees from a dizzy 40 degrees in Italy only the day before. I changed to a heavier pair of gloves and put on another top layer to help maintain a core temperature. Being a sufferer from Raynauds Disease, I could quickly felt the fingers starting to go white and so the heated grips went on for back up.

From here I would pick up the D115  to Val Cenis and take time out for a break. By now my foot was giving me so much grief. Mounts and dismounts were painfully slow and almost unmanageable. I had to choose my ground very carefully to consider the sidestand in so much as any negative camber whatsoever was out of the question. Since the fall at camp every attempt to right the bike after mounting it was a painful struggle. My foot simply couldn't handle the loading required to lift the bike upright.

​Why can't manufacturers put a sidestand on both sides of a bike? ;-) 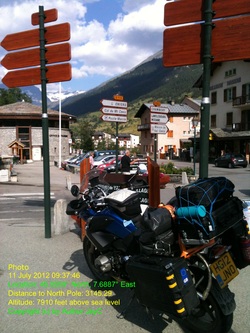 I spent about half an hour at Val Cenis for no other reason than a rest and to give my foot a break from the cumbersome slow and painful upshifts of the gearbox.

For occasional relief I would use my heel to upshift, though this too was awkward. However, it was the lesser of the two evils. Downshifts were no problem, my foot could manage downward movements, it just didn't want to be lifted, or have left/right directional changes.
Once again I was reminded of the items I lost on day 2 , in this instance my pain killers.

I remounted again and headed on toward the D902 to Col De L'iseran , one of the most photographed places in the Alps for travellers. To be specific, a photograph at the top of the climb and where the directional sign stands.

As I started the gradual climb from Val Cenis a very nice old Moto Guzzi California appeared in my mirrors as we both crawled our way up at little more than 40mph. Eventually , and as the road levelled I waved him passed and reflected back on the days when I too was riding a Moto Guzzi. Splendid bikes they are indeed, so full of character.
The climb to Col De L'iseran was beautifully rugged, almost like being on a different planet. I have never seen such rugged landscape throughout my Alpine travels over the last 3 years.
Sadly, since my early morning fall, taking photographs had become a very time consuming and painful process whilst on the road. I decided I'd just about had enough of stopping unless absolutely necessary, therefore the camera work would dry up almost completely.

I reached the top of Col De L'iseran and left the bike exactly where I'd stopped - on the road , which would require the least amount of effort to lift the bike again after remounting. The wind was howling up here , so much so that I paused before dismounting concerned that the GS would be blown over! The bike was close to upright where I had parked , not ideal by any stretch of the imagination. 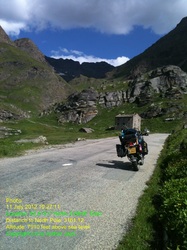 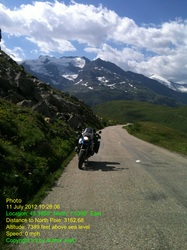 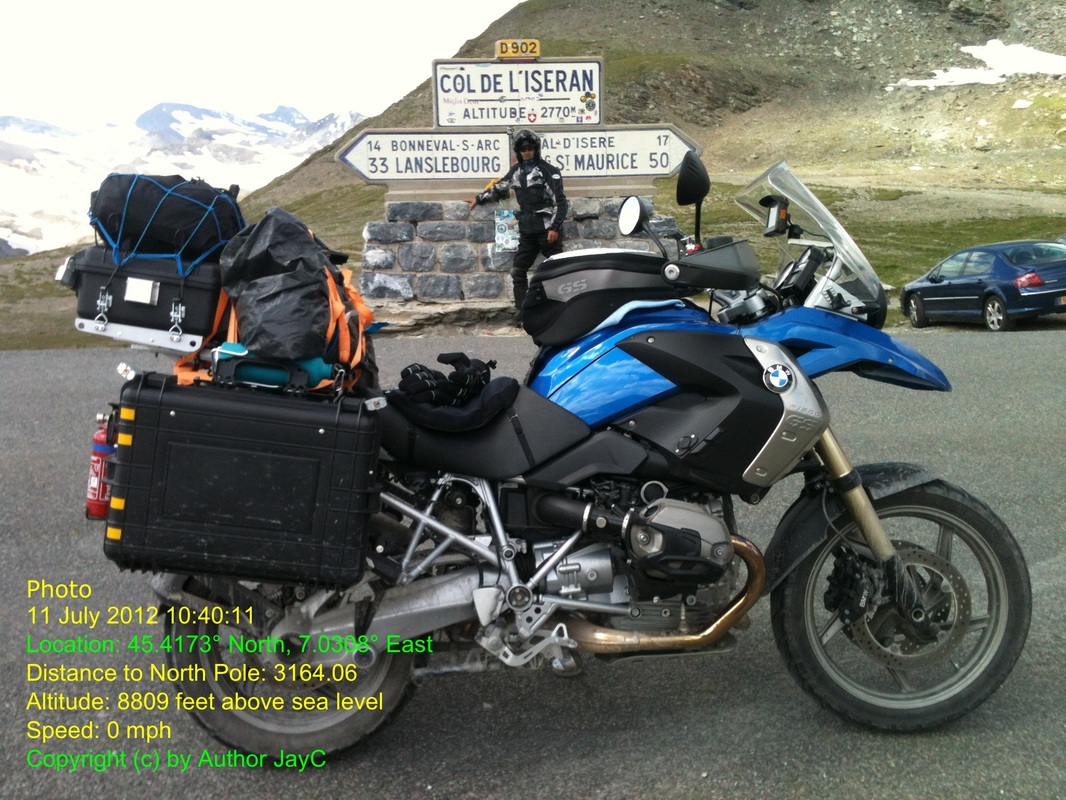 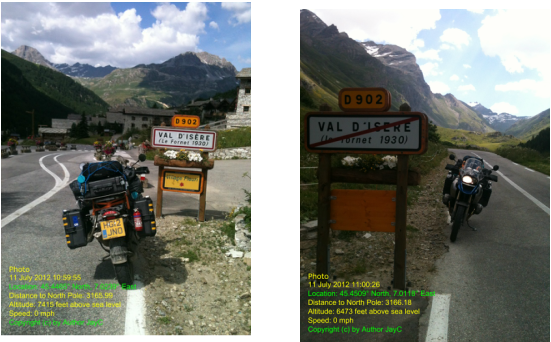 I continued on to Val D'Isere where I managed to locate the local pharmacy as I was in desperate need for some painkillers.

My stride had completely deserted me , even my limp had given up! I was now dragging my left leg around, much in the same way as Jack Nicholson did in The Shining. I noticed a Medic Centre close to where I was parked but gave this a miss on the understanding that a consultation would cost , and I barely had enough funds left to get home.

I rested here for about an hour, still not knowing whether my foot was broken or not , not that the knowledge would have made any difference.
Gear changes were still getting increasingly difficult and so sight seeing was no longer an interest or necessity, either! The fun had gone.
It was time to head for Paris.

My route would now take me toward Chambery, not Switzerland. Downshifts were still fine , the upshifts were still by 'heeling up' with the back of the foot and still a slow painful procedure. I held gears for as long as possible whilst being as kind as possible to the motor but this was no way to enjoy motorcycling.

The Sat-Nav had been programmed to avoid toll routes for the simple reason I could not afford the tolls anymore. This worked against me in some respect as it would have been far more comfortable to have got into top gear and forget about further gear changes for many many miles. 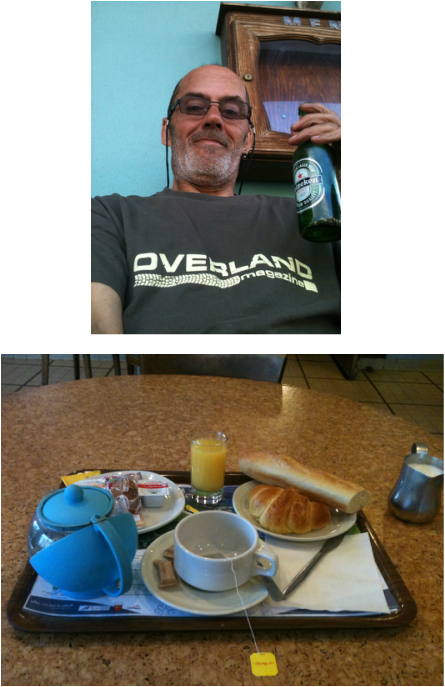 I was heading toward Lyon along a route that would see me driving into Pont d'Ain again , the town on day 2 where I had most of my nightmares come all at once after realising I had lost the most valuable of  my valuables.

I called in at the Hotel , parked in the Hotel garage and dragged my leg along behind me to the reception.

We exchanged some pleasantries before I fired my best shot! I asked Mr Pouchain if he was still prepared to offer me a room on the provision that I pay him when I get back to England.

"Yes yes , of course, that is no problem".
"Also , would it be possible that you could perhaps put an extra 50 Euros onto my bill and lend me that value in cash"?

Again ..."Yes of course, that is not a problem". Mr Pouchain had now been awarded my prestige Gold Star.

I suggested that as soon as I get back I would forward the costs onto him as soon as the new bank card I would apply for was sent to me. He wasn't so keen on this method but preferred to be sent cash. "Not a problem" I said ...say no more!
Brilliant , I now had a bed for the night, a shower, and a chance to give my foot a well needed rest , not to mention breakfast in the morning.

To wild camp, or any other camp would have been close to unimaginable as well as unmanageable under the crippling circumstances and so I checked in, the same room, removed whatever I needed from the bike and got changed into cooler clothing for the evening after my shower.

The Sun was back to full strength again as I sat in my familiar seat out front of the Hotel with a cool bottle of beer , or two, and continued blogging notes.

I was still some 300 Euros down with nothing to show for it and had just 100 Euros left from the 355 that Jo had wired me. It was going to be very tight to get back to Dorset on this amount , and the ferry had yet to be booked!