If there was any time I would have wanted a twist and go scooter it was now , whilst negotiating Paris and it's surrounding areas.

I was now into my stride for the final stint to Calais to meet my ferry. The miles rolled by with nothing more significant taking place other than a fuel stop. I had seen most of what I wanted to see and taken challenges on that did no harm to my off road riding experience building. I had no interest in the ride to Calais other than meet my final objective , to arrive before 18:00hrs. Only twice , but briefly, using the toll route , costing me no more than a handful of Euros. I cannot even recollect the exact route I took to Calais I was now into autopilot mode!

I arrived at check-in approximately 17:30hrs where I would show the text message 'boarding pass' image that Jo had sent me earlier in the day. I was then asked to pull up to the passport office where one of their people would meet me and lead me into their checking in building to ask a few questions about my emergency passport. After 5 minutes or so I was cleared to find my lane allocation and await my ferry arrival. 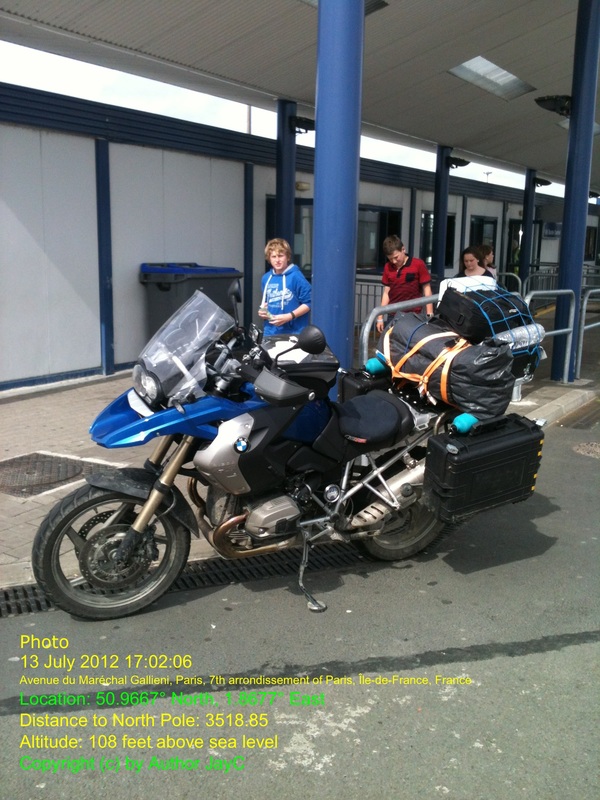 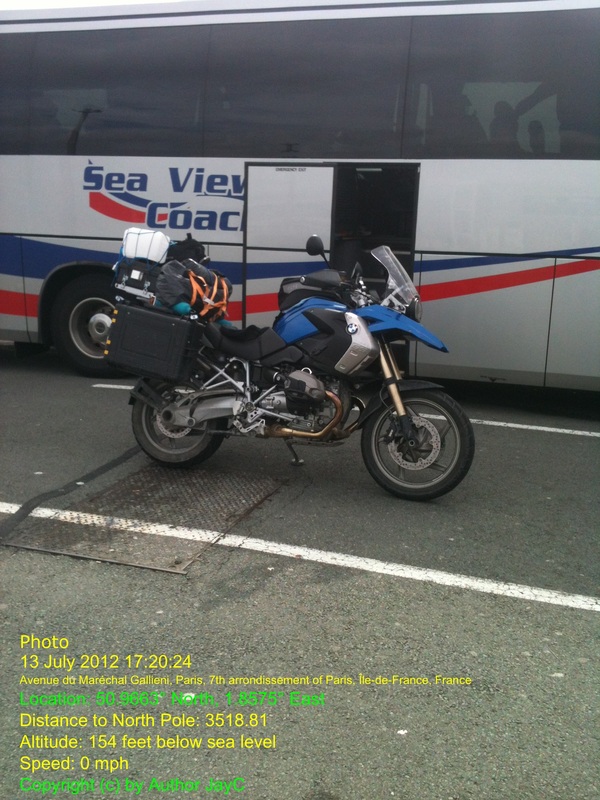 I had some time to spare as I pulled up next to a school party returning to the UK in a coach local to my home town. I took this opportunity to remove my waterproof trousers as the Sun had once again returned and looked good in the Dover direction. I finished off the rest of my Pringles, drank plenty of water and generally wasted time between mounting the GS again , dismounting and sitting on the tarmac lane, smoking , stretching my legs , remounting the GS and then doing it all again. The ferry was about a 1/4 hour late but when it docked I was first to board.

I hadn't yet changed my Euros to Sterling and hoped there would be somewhere on board that I could do this - there wasn't. Jo informed me via text that the big BP garage in Dover would accept the Euros and so I would make that my first stop when getting back on the road.

After a generally smooth crossing I was back on the GS and heading to the BP garage. It became immediately clear that I was back on UK soil when I asked the garage kiosk attendant whether or not he would accept Euros and I was greeted by a huffing, puffing, sighing grouchy blow hard! Oh how I despise the lack of tolerance and helpfulness of the English.
The attendant told me he didn't really like to do exchange rates as it doesn't really work out very beneficial to the customer. I told him that I'm fully aware I am going to take the hit but this is all the money I have and need to get to Dorset, some 160+ miles away. He reluctantly agreed to the exchange but unfortunately I could only squeeze £6.00 into the the GS , whilst having just 40 Euros left and in two 20 notes. He would only provide change for the one 20 Euro note after the fuel price had been charged.
I couldn't for the life of me understand why he couldn't have changed the other note if all he was concerned about initially was how short changed I would be on the exchange rate.
He stood fast, he wouldn't change his policy despite my needs. Yes, I was back in the country that the flag carriers call 'Great'! As I was leaving I asked him if he'd had a holiday yet this year and if not, go to France and be prepared to be treated like a human being, not a salivating dog trespassing on his forecourt.

I would moan at the things the British moan about when I left England and I would moan on my return , whereas most everything I encountered in between was fabulous.

I set off at a steady pace before slowly building to my cruising speed of 65 to 75mph. I picked up the M25 and as I neared the junction for the M3 South I could see very dark clouds in the direction home! The setting Sun would only serve to accentuate just how dark and heavy the clouds were and that it would be minutes before they burst.
No sooner had I left the M25 and joined the M3 a torrential downpour laid out it's 'welcome home' mat! The very first over carriageway bridge I came to I stopped and dug out the waterproofs again as well as the heavier gloves. I sat down briefly, had a smoke, looked at the clouds and simply muttered to myself   'sod it , I'm not stopping again for this bloody weather', and things like 'fuckin' typical, I left England in the rain and I arrive back in the fuckin' rain'!
I wasn't impressed.

I knew I had to make one more fuel stop before arriving home as I kept an eye on the fuel level reading. I arrived at Winchester Service Station where something very strange happened. The fuel level light had come on not long before I pulled in and despite putting my last £5.00 in the level light stayed on. I could not get my head around this as I set off from the forecourt constantly monitoring the 'range' reading, which starts at 46 miles left in the tank.

I would now have to be careful with my throttle position for the remaining miles. I looked at the road signage and noticed that the distance to home was more than the range left in the tank by some 4 miles. I dropped my speed a little more as I exited the M3 and joined the M27. I was now clawing back the deficit  between fuel left to distance to go ratio whilst maintaining a steady 50mph. Why did the fuel gauge not read my £5.00 fuel fill? If it didn't read it surely the fuel must be in there? Did the pump stop delivering? Did it deliver at all , perhaps it was just air it was putting in! I don't know, it was very, very odd!

From having 50 miles to reaching home and 46 miles in the tank to 12 miles to go and 14 in the tank , 6 miles to go and 6 in the tank , 2 to go and 3 in the tank, I finally arrived at home with a fuel range reading of 1 mile left in the tank as I rode the front path to the back gate entrance.
It was about 22:45hrs when I walked indoors and put the kettle on whilst I removed all my bike clobber and got into something more relaxing and comfortable.

I had the luxury of a full week off work to follow which would be most welcome whilst my injury still dogged me around.
The following Wednesday I would go to my GP who in turn made an appointment for me to have my foot X-rayed. The results showed no breakage but the diagnosis was put down to probably a crushing of my metatarsals.

The limp would start to subside some 17 days after the incident though the foot would still be sore!

To follow this adventure ride report are pros/cons notes I made regarding the use of my equipment as well as the BMW R1200GS.

Thank you for reading the pages of One Man-Two Wheels during the highs and lows and the moans and groans of my Alps 2012 Solo Tour.