Sitting outside the Hotel, with a green tea on a beautiful Saturday morning, I couldn’t help but think about my loss. It would still be on my mind for some time to come.
I was hoping to be one of the converted to E-Cigarettes but as my new electronic device was also in the Kriega bag I resorted back to my weaker side and bought tobacco. Actually that isn’t entirely true! I had stopped at a small Tabac shortly after the first accommodation, as back up just should any unforeseen circumstances occur during my adventure – that time came upon me sooner, rather then later.

The first rolled cigarette from the newly opened pack of GV nearly blew my head off!
The contents of the pack were dry , despite being sealed , and so these were going to be a little on the well seasoned side. In my experience dry tobacco has always had a bit more kick to it than a normally freshly opened pack.

I hoped that some following driver would have seen my Kriega fall from my waste , probably that sound I’d heard the day before whist riding , and perhaps send it back to me even after pocketing the cash. The other contents were of no use, or very little use to anyone other than a fraudster!
Retracing my steps was out of the question as the bag could be anywhere up to 60 miles back. I had it at my last fuel stop and hadn’t seen it since. I hadn’t needed to see it since!
The Kriega is just too big for someone to miss and it was hardly likely it would still be where it fell by the following morning , or even within minutes after it fell!

My only explanation is that either the fastening buckle had broken, which I think unlikely in such a short time of ownership/use, or that it wasn’t fastened correctly about my waist. It wouldn’t be the first time with interlocking plastic fastenings on these type of strapped items that the buckle can be accidentally offset but still clasped together. I feel it was perhaps an offset fastening on my part that caused it to fall from me. At least that’s how I prefer to assess the incident whilst giving the Kriega quality the benefit of the doubt. I cannot fault the Kriega equipment generally and this waist bag was no exception.

There would be no early set off today as I had to wait until at least 10:00hrs before we could go to the Post Office to collect my wired funds.
I had told Jo that I will be heading back home but she suggested I would perhaps like to continue a little further, at least to Marseilles and see a little more before returning home. Jo had wired a total of 355 Euros for my collection and so after a little more thought we both agreed that I do as much of the planned route as possible.
The Alps were back on again...thank you , Jo! x

I’ve never been a particularly lucky kind of person , in fact quite the opposite. I’d asked Jo when we met  ‘are you sure you want to be with me – your life will change from ‘lucky’ to ‘shit happens’?
Jo is a very optimistic person , again, I am quite the opposite – we are still together over 6yrs later.

At 10:00hrs , Morel , Laurants associate would accompany me to the P.O to collect my wired funds on his ID. The heat in the P.O was quite extraordinary, sweltering in fact, as we stood our place in the queue.
Eventually we reached the cashiers counter, she copied the Western Union transaction number from my iPhone, typed it into the relevant field on her computer and said there were connection issues. We were advised to go back to the Hotel and await their phone call for further instruction.
The P.O would close at noon , it was Saturday.

11:45hrs and still no call from the P.O so we set off down the street again, only at a quickened pace.
In France everybody that knows somebody is stopped in their tracks whilst handshakes takes place and so ‘hurry up’ is not something that is likely to sit too comfortably with them. Unlike the UK where everything is a mad rush.

A friend of Morel turned up on his Kawasaki Quad with his daughter on the back. They had a short chat before Quad man wheelied away up the road!

By the time we had reached the cashiers counter it was 11:55hrs. We tried again and again there was no joy. I tried to call Jo but her phone went to answerphone mode. I frantically text Jo for her to ring me immediately she gets my message , which luckily she did within moments.
Jo was put on to the lady cashier because amongst many of Jo’s qualities she can speak fluent French! Jo was in turn passed to Morel whereby it was at last discovered there was a discrepancy between the transaction number Jo gave me and the number the cashier was punching into her computer!
With the now correct number being used I had 355 Euros sitting in the palm of my hand at 12:28hrs.
No time to waste , back to the Hotel , pack up , check out , mount up and ride south. 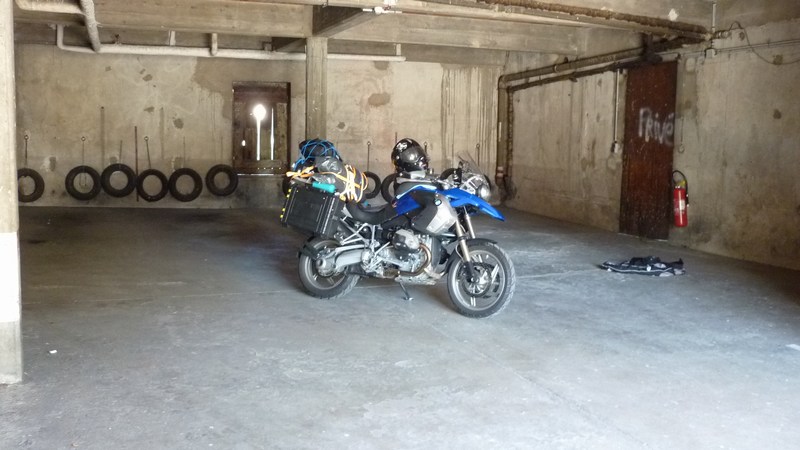 The sat-nav tells me one thing but I tell it something else – the sat-nav was right , I didn’t want to be on this road. This time behave JayC and just head toward Grenoble and get some lost miles under your belt.
I keep following for Grenoble until joy upon joys I see the BIS sign for Cote d’Azur.
Finally back on track to my first POI, Saint-Jean-en-Royans.

Nothing can stop me and the GS now – except for a road blocked off due to a local motor race meet several kilometres down a very twisty and winding road. The couple on the Harley were facing my direction after having just been turned back and I asked if they speak English. The rider said ‘A little…’ , I asked a route to St Jean-en-Royans and he replied “follow me, you don’t want this road”, so I did -  ‘Merci’!

The HD rider led me for some 10 , maybe 15kms before I sounded my horn at a bridge to get his attention. I saw his brake light come on at the other end of the bridge, L'Isère à La Sône (D71) as he went out of sight around a right hand bend. 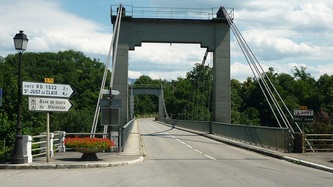 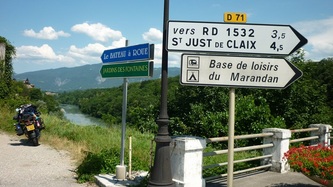 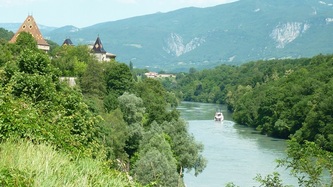 A minute later he was back to where I had pulled up. I told him I am ok from here but wanted to stop for some photo’s as I am on a touring holiday. This guy had ridden well out of his way to get me this far and turned back to go past the road where I’d met him.
I do find the French to be very obliging people , I would find out just how much further into my travels. 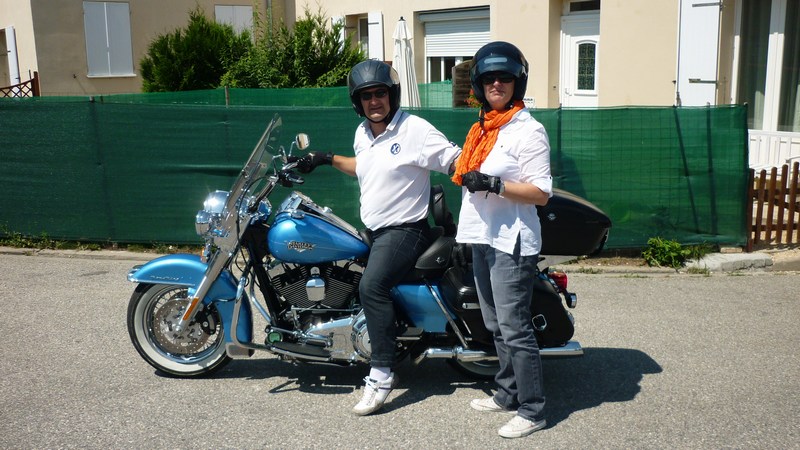 Next stop, St. Nazaire-en-Royans, where I would have a double scooped strawberry ice-cream and ice cold water to be followed by an expresso. I didn’t necessarily want the expresso but I was playing for time after asking the kind waitress if there was any possibly of putting some charge on my iPhone. 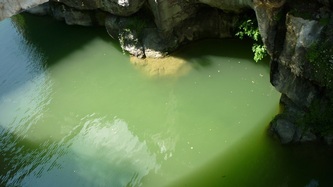 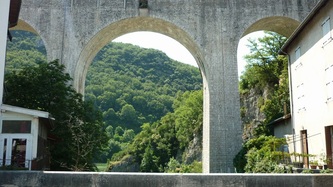 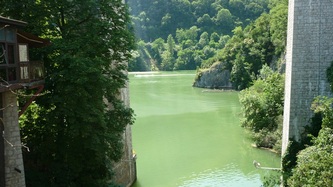 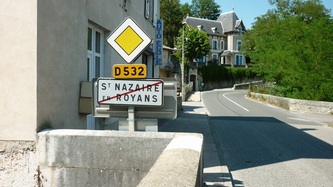 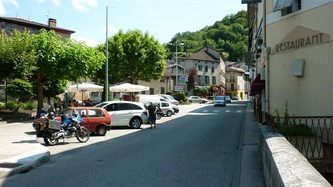 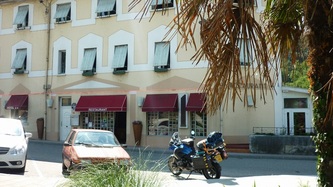 The very kind waitress who placed my iPhone on charge whilst I settled with my maps and a very nice double strawberry ice-cream. 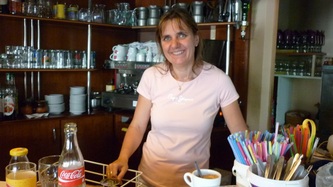 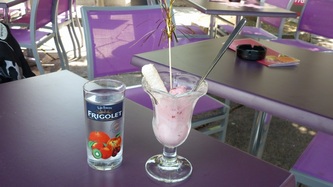 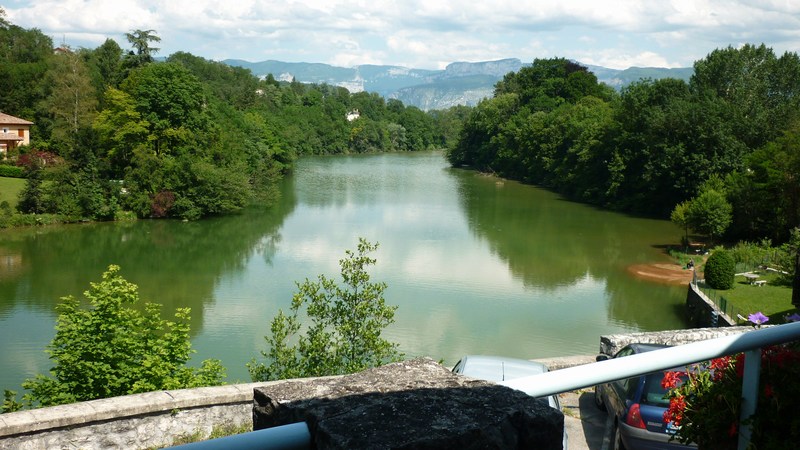 A view from the ice-cream table!
Jo informed me that the local forecast in the UK advised of 1 months rain would fall during the weekend that I had just started in blazing sunshine and heatwave temperatures.
I wished she were here with me.

I spent an hour or so at St Nazaire-en-Royans checking my route whilst planning for the detour to Marseilles for my emergency passport which in turn was doing no harm to the charge rate time for iPhone.
The route through St Nazaire-en-Royans , St Thomas-en-Royans , St Jean-en-Royans, and along the Combe Laval Road to Col de la Machine takes you along the D76 and onto the D2. This takes you all along an incredibly spectacular route, the Combe Laval road. I continued along the D2 to the D54 and then the D518 to the Grand Goulets to La Chapelle-en-Vercors.
Alps 2012 + 3