Some of the switchbacks were nearly as tight as those at the Stelvio and upon entering one right hander I was faced with the aftermath of one driver who had got it wrong, for one reason or another.
I came across a Mercedes Camper that had gone over the barrier and come to a rest in clear view of any passing motorists. It lay on its side, broken windscreen and numerous contents of no significant value strewn about on the grass. One such item was an empty beer can. Could this have been a clue or perhaps just an item of litter from some separate occasion? Who would know? 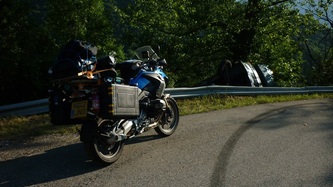 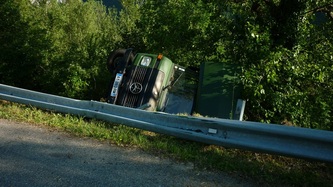 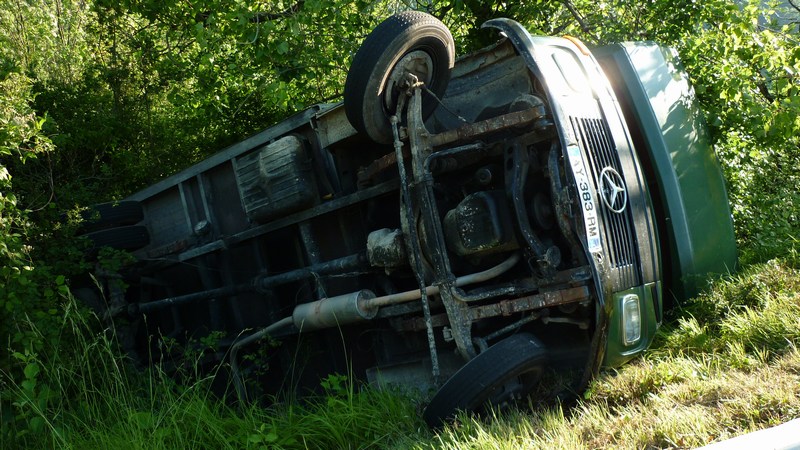 At the base of the descent I took a turn that showed on the map would lead to a dead end , but I was curious to see what may be down here of interest. A passer by said that a church is at the very end of the road but I didn’t see a church , I saw something far more interesting!
After a quick scan around I decided that this would be camp for the night. A river was within feet of my pitch area behind a building that housed some kind of electrical /hydraulics generator. 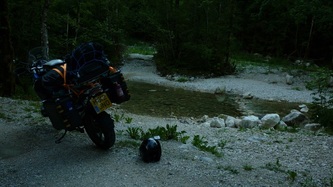 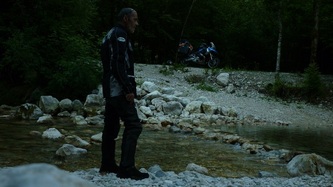 There were a few cars parked just up from here and one young lad on a dirt bike but other than this it was quite remote and very quiet. I noticed a man had seen my arrival and was watching me briefly from the house across the way and about 100 or so metres in the distance. For a moment I felt my cover had been blown but nothing would come of his sighting and I made my camp for the night.

I knocked up some supper which was pretty much my food intake for the whole of this day.

This part of my blogging would come to an end at 22:00hrs as I chose to put my pen and pad down and listen to the running river near by. 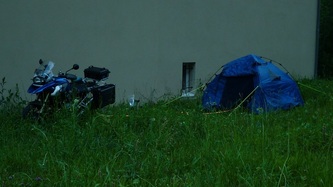 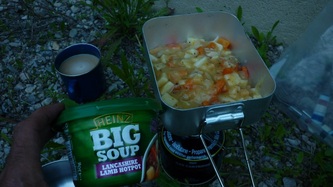 
Not the best sleep I've ever had, added to that the first night of rain.

I tried to pitch as discreetly as possible although there's very little discreet about hi-viz guy ropes!
It was 06:00hrs and in the distance I heard a kind of rhythmic percussive sound, up near the house where I was spotted when I set up camp. It had a sort of hollow wooden instrument sound to it and it sounded right on the hour.
I wondered if it were some kind of morning alarm clock to ready the villagers for the start of a new day.

I awoke to the sound of both heavy rain and a strong wind and did wonder about the security of my new Khyam as it was only pinned by four corners but she stood her ground well.

A short while later the rain had ceased and the clouds had blown on by by the once strong wind, which too had died down. I took myself down to the river for my freshen up. 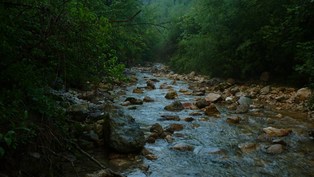 The Hornet that was determined to make my life hell for a half hour whilst pitching up the night before had gone - for a long time - a very long time - in fact forever!

Down by the river and upon opening my wash bag I was greeted by a white creamy mess! Not trusting my sense of smell at that time in the morning, or any time for that matter, I went for the reliable taste buds route, afterall it could only be toothpaste - couldn't it?

Or perhaps it was Factor 30 Sun Cream ....yuk , gross!
For several moments I was spitting feathers before I could get on with my duties. 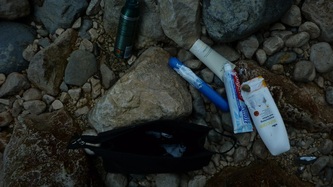 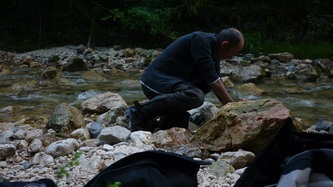