The previous day followed the same pattern as those before in so much as I was once again on the scrounge for iPhone charging. I tried several of the campers until eventually a family pulled up next to me in their motorhome, and after giving them an hour to settle I took my opportunity to pounce!

He looked a decent fella to me – he was , and kindly put my phone on charge for several hours. Hopefully this would last until I could find a town large enough to have a phone shop where such devices could be purchased.

I was up early as usual and freshened up at the river after a morning brew and before closing down camp.

My intention was to seek out and ride the Col du Parpaillon route to Embrun from the Jausier side before doubling back on myself and heading further south to Col de Tende. I also wanted to include Clue d’Aiglun in my plans en-route to Tende, then head back up through Italy, Switzerland and over to Paris before booking a ferry back from Calais to Dover to start the last leg home.

I took a slow ride through the valley of Jausier whilst keeping a keen eye for the Parpaillon route.

Looking ahead and into the hills I could see a number of buildings that appeared to be built into the rock face.


On the approach to a small town I then caught sight of a building with the name ‘Parpaillon’ on its gable end - a little further up and outside some houses a sign I studied for a moment or two. 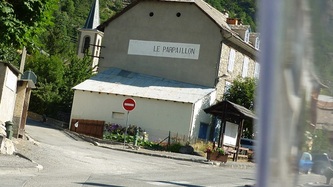 Things were looking good and I felt a new thrill begin to take over me. I headed up the twisting route until I reached a small Chapel , St. Anne if I remember correctly. Opposite this was a picnic area with more signage, which included a painting of this very spot! 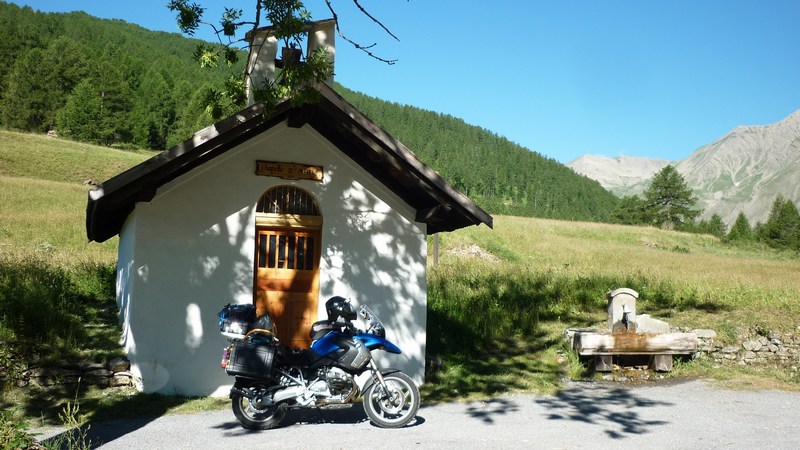 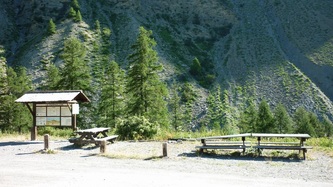 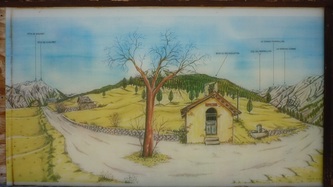 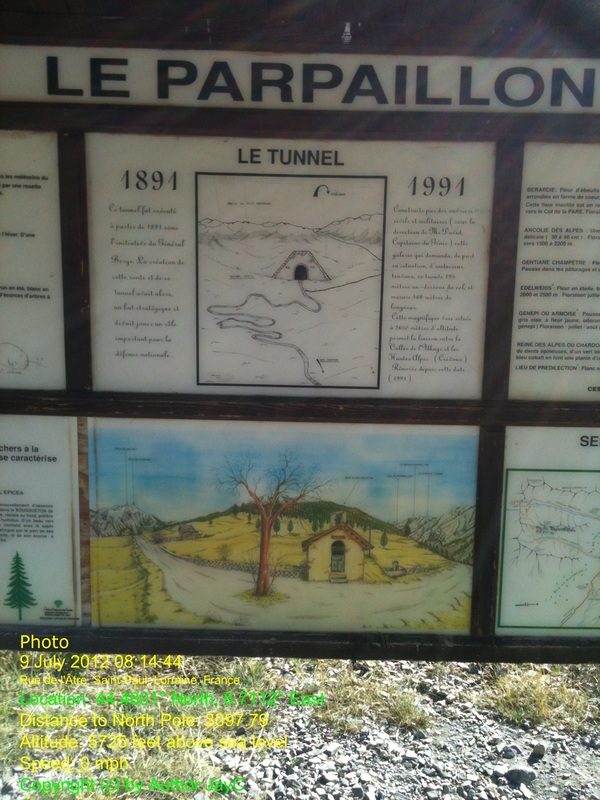 Being relatively inexperienced off road , certainly with two wheels, I had little idea what to expect or even what lie ahead of me.

I used the fresh water stand pump to fill up my now empty bottles but not before taking some fluid prior to the ride ahead.
At the foot of the Chapel was a surprisingly large amount of Butterflies, some fluttering and some just bathing in the Sun whilst clinging to the wall. There must have been 30 , 40 , perhaps more. 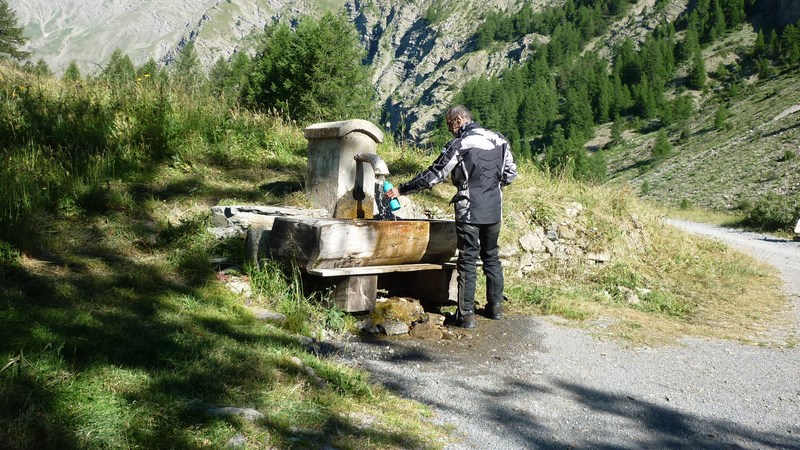 Flies …. I remember the flies so clearly! The moment I stopped they would home in and surround me , flying in dizzy patterns immediately ahead of my helmet visor. These ghastly creatures would still be with me until I reached a speed of perhaps 20mph. 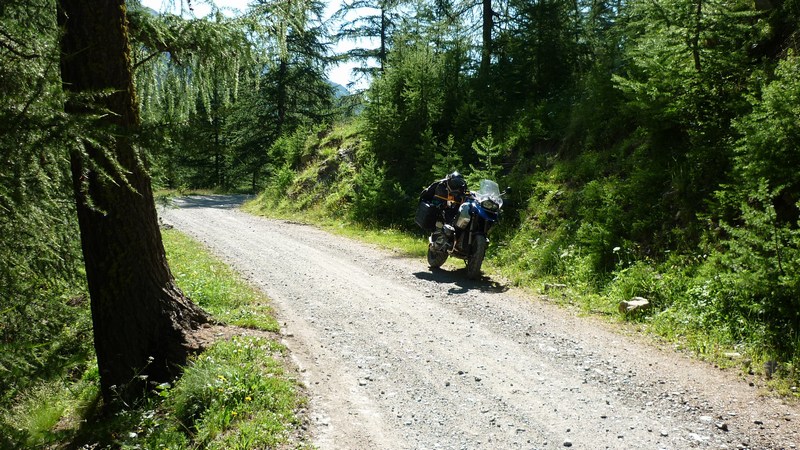 A few kilometres along the track would see a small bridge crossing into the valley. 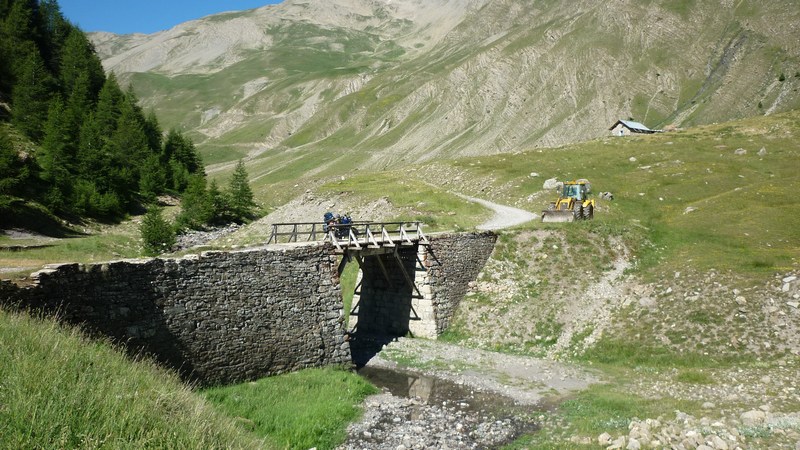 All along the track and up to this bridge there was an astonishing amount of these black/orange Butterflies – and then the penny dropped!
Butterfly-Parpaillon (Papillon) , this was why Parpaillon is so named.

In this heat the camera work was fast becoming a bind but being aware that this isn’t a place one can visit as and when they please I stuck with it for my own recollection purposes no matter how much it interfered with the riding experience. By now I estimated the temperature inside my clothing to be close to a tormenting gas mark 7, and the day had only just begun!

The single biggest problem, for me at least, with stopping , was the immediate invasion of flies. The ‘Fly’ , that common creature we all know only too well , the only creature on Earth I truly detest…damn those little blighters!

I crossed the bridge and came to a fork in the track. Straight ahead had a sign with an exclamation mark. To the left, and an easier looking route that actually looked like it went somewhere, changed to grass with two lanes of tracks where four-wheeled vehicles had been. The straight ahead track seemed to come to a dead end less than 100 metres ahead – I turned left.

The track I was now on changed from easy looking to more challenging the further along I rode. A building ruin stood ahead of, me but to my left , well I’d never seen so much cattle in one place before. So many beasts with a seemingly intentional direction of travel and yet no shepherd , dog , or anything else to lead them…extraordinary! 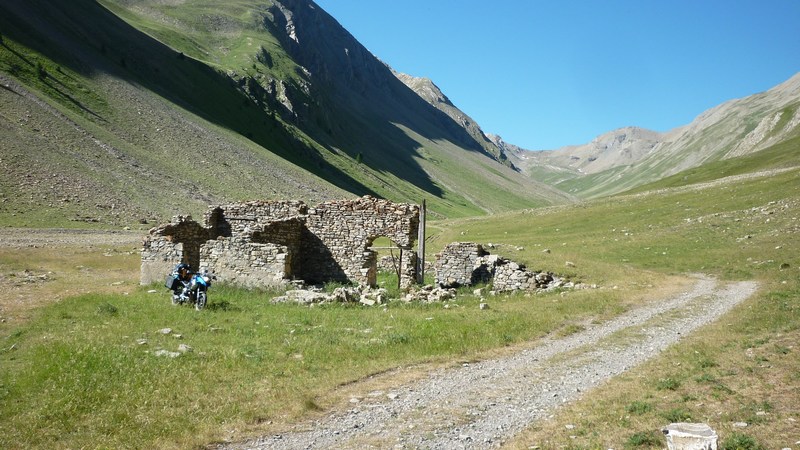 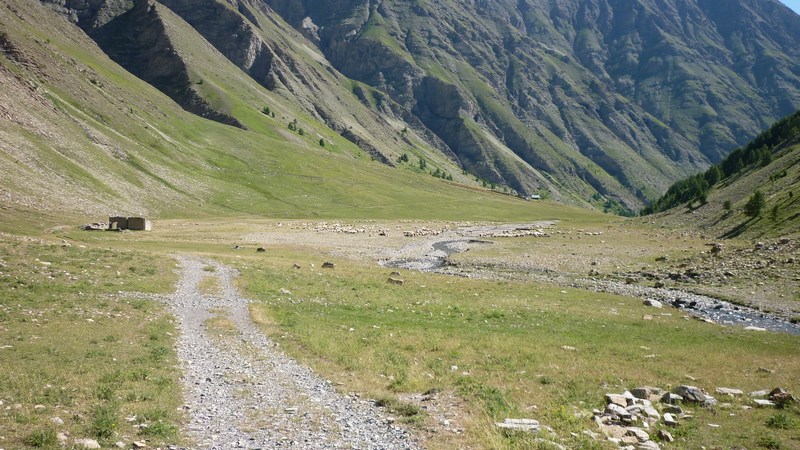