The track gradually became harder to ride with small rocky stream crossings and a boulder strewn landscape getting increasingly more difficult whilst the track itself was fast fading. Something didn’t feel right , something wasn’t right! I negotiated the boulders to do a large 360 turn and headed back to the fork near the bridge.

Upon reaching the fork I did a left turn in the direction of the exclamation sign. The track dipped and all made sense now. The track didn’t simply come to a dead end as I’d previously thought but instead dips out of sight before the long climb up the mountain side. Even from down in the valley the mountain climb could not be made out as it was in a state of almost perfect camouflage against its own background. The only way to know this was a continuation of the track from the valley would have been to see somebody else riding/driving/walking it.

Some way up the slow climb I took a moment, or three, for a breather, and to take in the panoramic view, not to mention to take on some water. 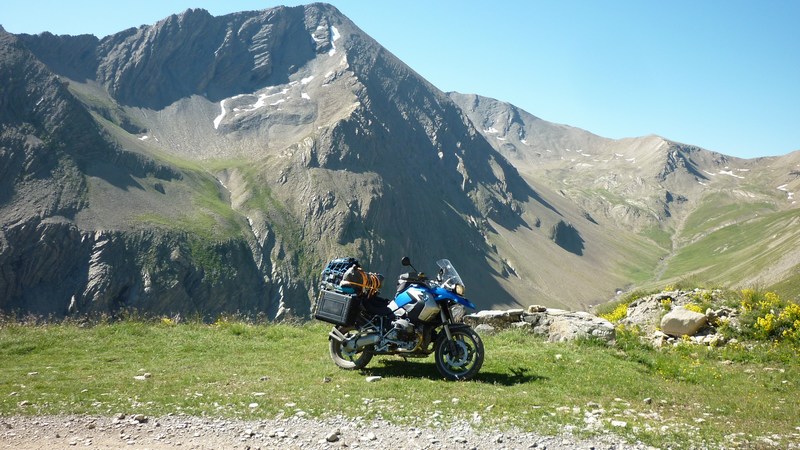 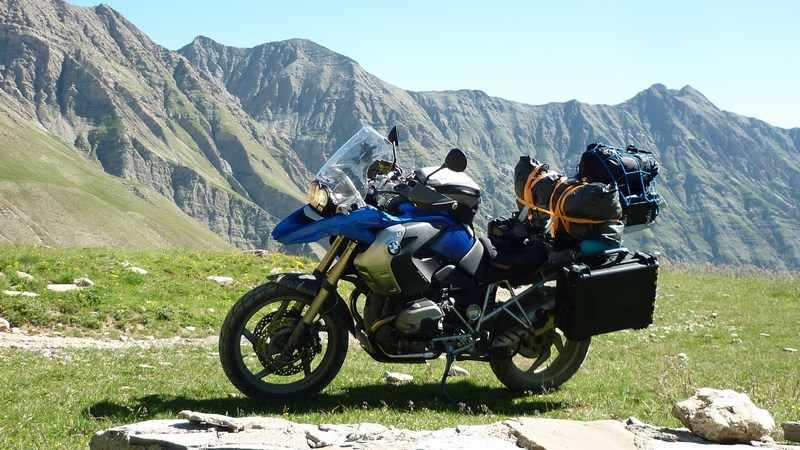 Prior to my rest break came the moment that caught me off guard! A Marmot sprung up from my right and made a B-line to the my front wheel. In a moment, and with several hundred kilos bearing down on it, the Marmot chose wisely and turned back to whence it came. Unfortunately he had left his mark with me for 100 metres or so after my initial audible yell , something like “wherooaaha…”  as I suddenly felt my sphincter muscle tighten!

As my rhythm had been gate-crashed and a wobble from one side of the track to the dangerous side became the way to travel, I stopped and grabbed my breath whilst telling myself “come on now , get a grip , you’re nearly there…”

It was during my rest break that I decided to shoot some video footage and narrate a short piece about my adventure to date. The mind works in mysterious ways when in total solitude and I found myself recollecting the Col de la Machine experience two days previous and started to become a little emotional and unnecessary!
I guess it’s the difference between mental thoughts and actually speaking those thoughts aloud. The speaking version always seems to heighten the emotional state.
I like to think also that part of the reasoning for this emotional disposition I found myself in was that in the back of my mind I hadn’t forgotten our Alps 2011 Tour de Disaster! This coupled with the events of day two, and the realisation of what I’d lost , fearing yet another disasterous adventure only to result in a 360 turn back to the UK without having seen or done anything that I’d planned to , and of course the fact that Jo had saved the day.

The climb so far had been a challenge. I am not particularly fit , have limited off road experience on two wheels , am a lightweight and was alone with a very heavy bike to haul up this mountain track.

Taking up the challenge under such circumstances didn’t exactly surprise me , though turning back was out of the question. I had to continue to prove to myself I could ride this much talked of POI in motorcycle and 4x4 circles. Of course, I wouldn’t necessarily recommend such a challenge to a lone rider for obvious reasons , such as in the event of a heavy fall , mechanical breakdown or any other state of emergency then there is no telling when the next person would be along. On top of that there is no mobile phone signal up here!

I turned the Immortal Video Glasses off and continued on up the climb. I found the climb to be a very slow process , rarely out of first gear and frequently checking the oil temperature reading. The rocky surface was becoming more and more gnarly with occasional cross path ruts just where you don't want them - right in the middle of a tight switchback.
Though the GS was heavy going , especially loaded with panniers and other luggage, it nevertheless took it all in its stride with a confidence inspiring sure-footedness.
Each switchback was a combination of fine throttle/clutch control coupled with the rear brake only to keep things moving along smoothly and as stable as possible up the seemingly never ending climb. By utilising this method of slow control minimises the need to place a foot down , which I didn't have to resort on any of the switchbacks , fortunately!

I am not sure whether or not the rest period was a good or bad decision because upon remounting I had a slight feeling of 'am I ready for more of this'?
It was as though my rhythm had been broken by the interruption giving the impression I was starting all over again.
I had to get my rhythm back quickly because stopping on awkward switchbacks mid-turn for three-point-turns was not something I particularly wanted to undertake, especially as so many of these turns were of the negative camber variety.
I maintained the throttle/clutch/rear brake approach which became even more important for accurate slow control on this gnarly terrain. 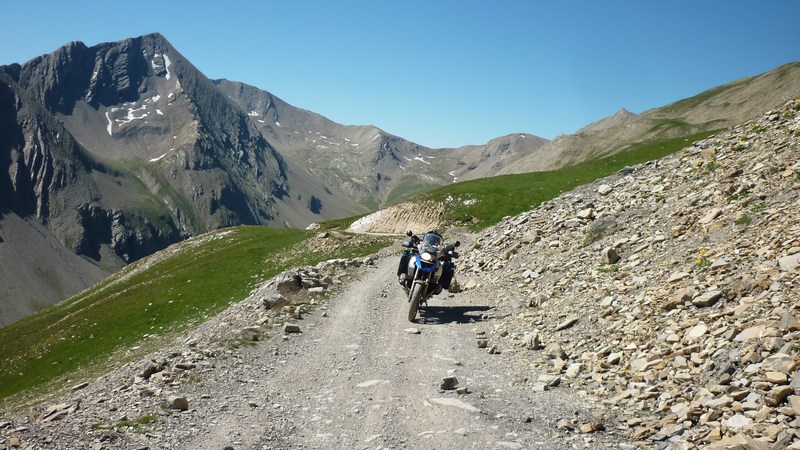 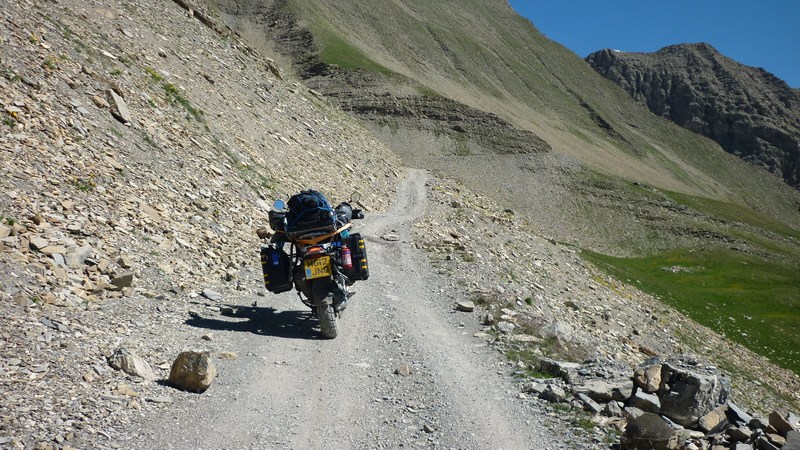 On the approach to some of the subsequent switchbacks all that could be seen was blue sky. There was no indication of what was over the right hand side of a left hander, how gradual or steep the drop and so a cool and calm approach was adhered to at all times. 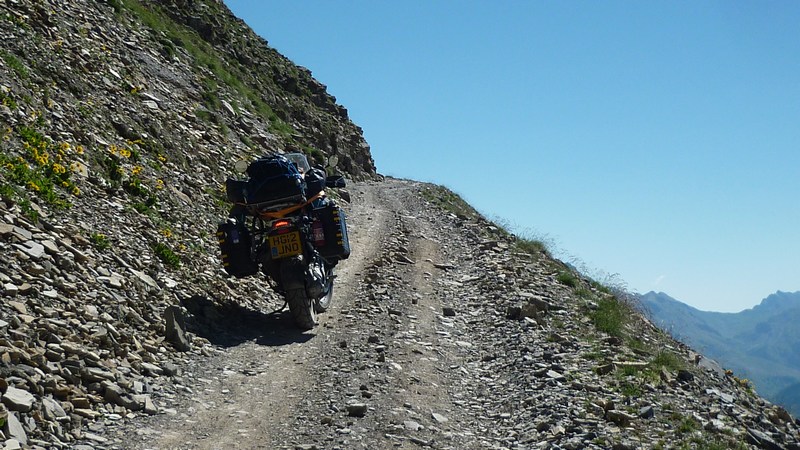 A little further and I had reached the top of the track and pulled up alongside two German riders who had come from the Embrun direction. 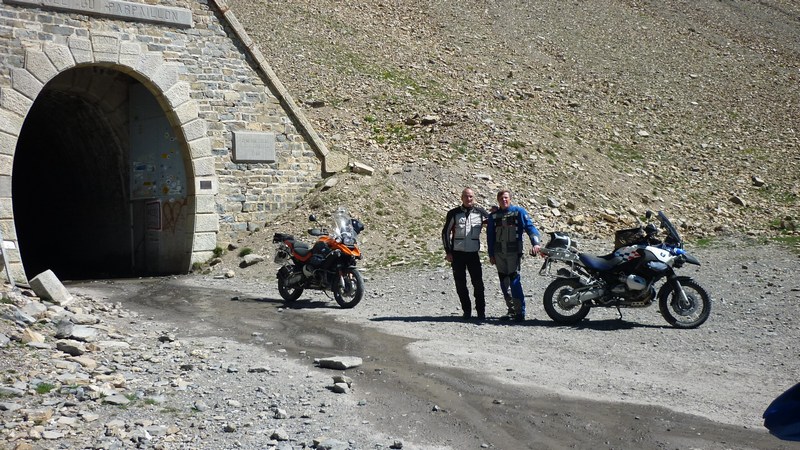 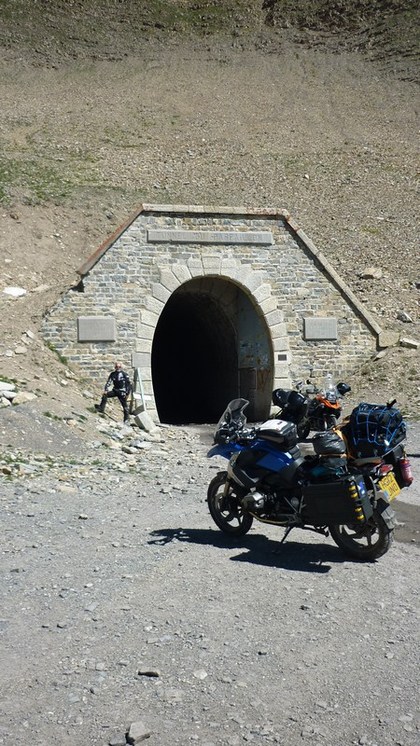 My first ‘off’ of the adventure to date was just moments away!

Being a wearer of prescription glasses , primarily for reading, but which can be comfortably worn whilst driving/riding with no impairment on vision, I had forgotten I had them on. To make matters worse they are of the react to light variety. In the clear and sunny day I had become accustomed to the dark tint I was now looking through. When asked about the tunnel length etc the English speaking of the two Germans said “you can see the other end from this end but keep all your lights on, and be careful – there is ice inside!”

I positioned the GS for my ride through , headlight on , and the forgotten prescription ‘shades’ in place , I could see bugger all!
There was a little water upon entering the tunnel and then it was pitch black. I had travelled no more than a couple of metres before thinking ‘sod this, something ain’t right!’ and went to apply the brakes but a sheet of ice measuring approx 1 metre wide by 3 metres long by 15cm deep applied the brakes for me!

“What the fuck was that?” I shouted! I think the Germans understood this version of our language and if I didn’t know better they were having a barrel of internal belly laughs!

Suddenly everything became clearer , literally! The impact and fall had displaced my glasses and there it was in the distance , the light at the end of tunnel.
I asked the German guy whilst trying hard not to laugh myself “Couldn’t you have told me I still had my glasses on”?

He replied “ I did wonder why you left them on”!
I then said “ I bet you will be telling all your mates about this one”?
“We always tell our friends” he said.

Lesson learnt , we all picked the GS up as they reassured me they would stay put until I reached the other end before making their own descent on the side I had previously climbed.
Half way through the tunnel another ice slab was even bigger , covering almost the full width of the tunnel with just enough room to get the GS through, but with the right bar almost touching the tunnel wall.

A slow gentle ride through saw me reach the other end with no further issues.
Alps 2012 + 10