I set off from Ferndown, Dorset at 03:15hrs on Thursday July 5th to commence my French Alps Tour. My ferry would be leaving at 06:40hrs from Dover to Calais.

Day after day the rains kept falling in the UK, certainly in Dorset and now the time had come to mount up and ride, regardless of what weather awaited me en-route. It didn’t take long for the rain to show an appearance , almost in a ‘bon voyage’ kind of way!

The rain started to fall just before Winchester on the M3 and so I pulled into the service station to put my waterproof over trousers on, change gloves and get back out on the road.
A fairly straight forward run to Calais saw me arrive with a little time to spare before boarding.

The night before leaving home I had approx 3hrs sleep. I had been working all day and due to the atrocious recent UK weather patterns I could not load up the bike until the rains had ceased, which was about 21:00hrs that evening. I checked then double checked I had everything I was supposed to have for the journey, timetables, routes, Sat-Nav programmed routes, basically the whole inventory and itinerary. To have such little sleep could hardly be recommended as good planning, or even wise, however, the situation was what it was and that’s how it would be.

This was to be my solo trip around selected places of interest within the French Alps with a possible visit into Italy, Switzerland , Austria and Germany before returning home, however, even the best laid plans don’t always work out , and these weren’t the best laid out plans!
The budget was ‘cheap skate’ , meaning I had little money to take and so my intentions were to wild camp at every possible opportunity excluding the first night.
Just a few days before setting off I had ordered a Khyam Nevis 300 3 person tent which cost about £60.00, including shipping, and which arrived the next day.

I departed the ferry port of Calais and headed to my first stop over, a bed and breakfast in Saint Paul , just off the D13 and east of Neufchateau.

The weather was better than that from whence I set off from, though there was still much cloud about.
Some distance further into rural France I made a stop at a lay by, where a 'truck stop' type hot food and drink van was set up. 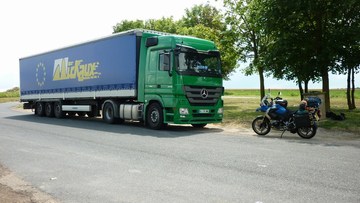 I was feeling a little peckish and settled for a portion of chips and a coffee. Hey, I'm British!
Another half hour had passed and so I remounted and put some good miles under my belt.

I was relying heavily on the sat-nav now as this was a very rural part of France. I pulled over at a cross roads to check my bearings with the road map whilst making the most of the opportunity to take on some water. It was extremely hot in the afternoon sun with no shade cover whatsoever. I managed to place myself on the map and could see I had little more than maybe 15kms left to meet my destination.

The road behind me , and to turn right was the direction of travel. I did the u-turn to park off the road to check the map. 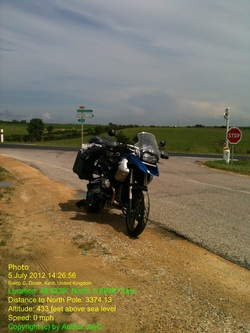 I was very, very tired, the lack of sufficient sleep the night before meant I had been awake for about 21hrs in the last 24, not the ideal way to set off by any stretch of the imagination!

At last I had reached my destination – La Ferme des 3 Suissesses , in Saint-Paul.


The owner, a Swiss woman, had as much in common with the English language as I did with that of Swiss language, and so began another challenge, the language barrier.
The GS was securely housed overnight inside a barn garage.

The B&B was cheap, no frills , a TV in the room but little else to make it anything other than a bed and rest for the night. The back garden resembled a building site , whilst next door had a repetitively ‘ee-awwing’ donkey, and the whole village was awash with cats. Personally speaking, I am a cat lover and said an English ‘hello’ to several of them!

The centre point of this little village could only have been the church as nothing other than neighbouring houses and several other B&Bs existed. One grave that caught my attention just happened to be the largest and had the names of several generations of the same family on the head stone. 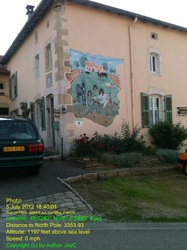 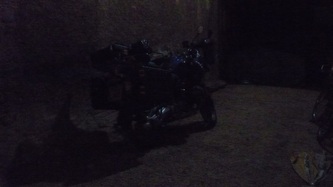 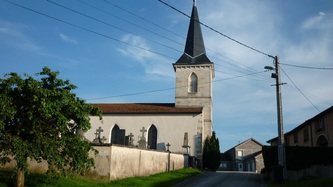 A view through this window was the point of most interest to me in the small village. 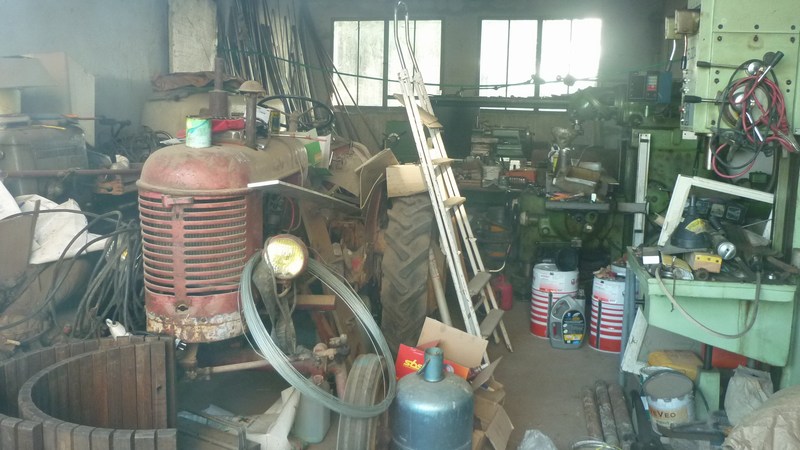 Though I had a whole evening to get through with little in the way of occupying my mind I decided it was as good a time as any to start blogging my travels into a notebook brought along specifically for that purpose. I chose not to sleep straight away because waking up in the early hours was not something I particularly wanted to be doing and so stayed up into the evening.
I turned on the TV, flicked some channels and saw that ‘Octopussy’ was about to start! I thought ‘perfect’… this will waste some of the evening until a suitable time to go to bed. It turned out not to be so perfect after all because a French speaking Roger Moore as James Bond failed to tick any boxes for me. I turned off and got my head down for the night.

I was last of 5 guests to the breakfast table due to the fact that , and I’d only found out by chance, I was still living in the past , an hour in the past to be precise! For some unknown reason , which became clearer why at a later date, my iPhone had not reset the time after the channel crossing and it didn’t occur to me to check either. It was far too trivial a matter for concern – I was on holiday at last after previously having to cancel due to lack of sufficient funds and that was all that mattered.

I paid up, checked out, fired up the GS and we were off again. Turning the GS around whilst fully loaded was a bit of a pig within the confined width and uneven surface of the barn. 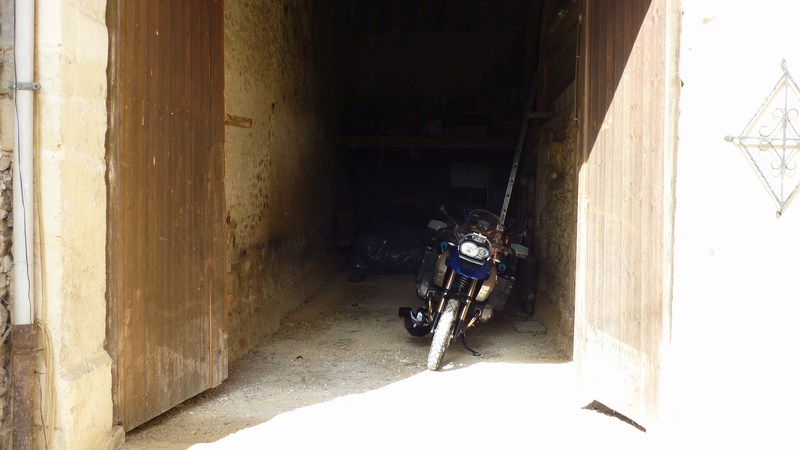 I eased into the ride gently and progressively built up the pace.This is by no means a spectacular part of France and so I pressed on toward my first POI, Saint-Jean-en-Royans in the Rhone Alps.
I approached a small village called Martigny Les-Bains , about 15kms on from the B&B and on the D429 southbound , whereupon I caught sight of a fire damaged building.
This was once the premises of several small businesses , of which one was the seemingly fatefully named ‘Hot Trikes’! I stopped roadside to make the best of a photo opportunity. Nothing had survived the fire , machinery, vehicles, roof structure, nothing. 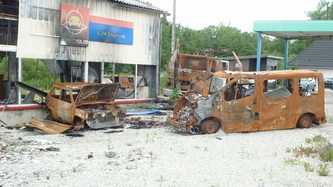 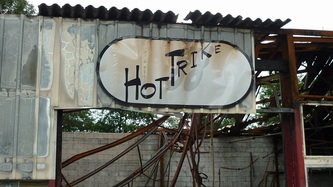 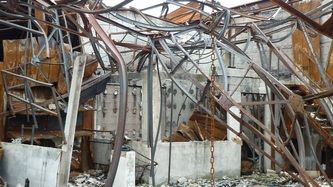 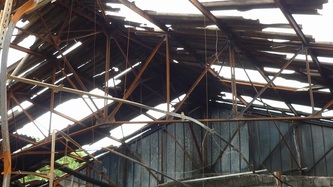 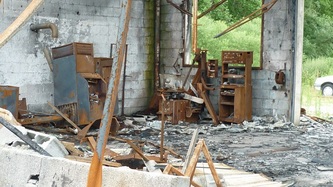 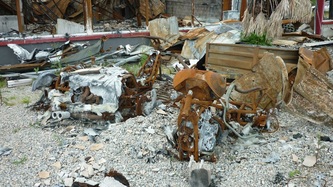 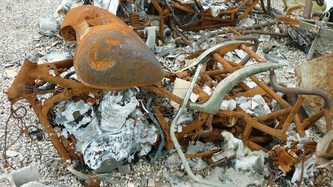 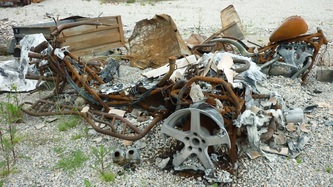 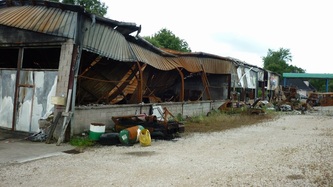 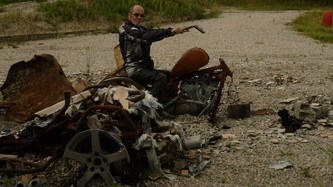 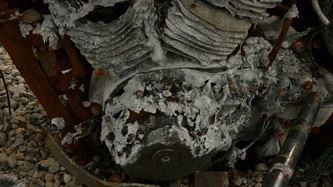 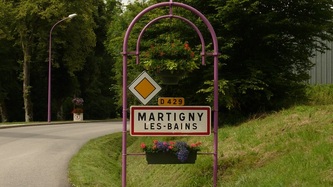 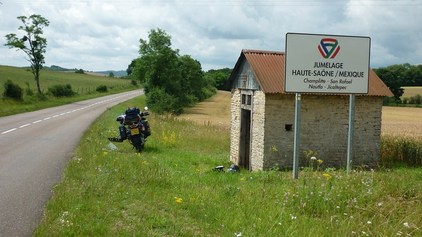 After 20 minutes or so I remounted and pressed on.

At one point along some rural roads it started to rain just enough to show tell-tale signs on my visor and so I looked for a stopping point to put the waterproof leggings on again as well as an extra top layer.

Coming down a hill I noticed a small roadside hut, of which there are many throughout France, which looked an ideal place to pull over.

In fact it was so good that I couldn’t resist the moment to try out the new mini camping burner, which cost £7.99, by making myself my first hot brew on the road. Inside the hut was a cut-out in the brickwork, much like a bread oven and which would serve perfectly for the sighting of my cooking facilities. It occurred to me that I could doss a night in this building if absolutely necessary as it provided good shelter in an emergency. I rested here for perhaps half an hour or so before moving on. 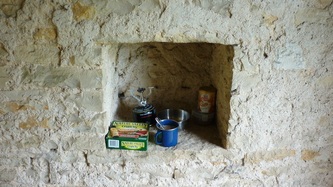 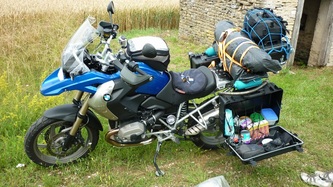 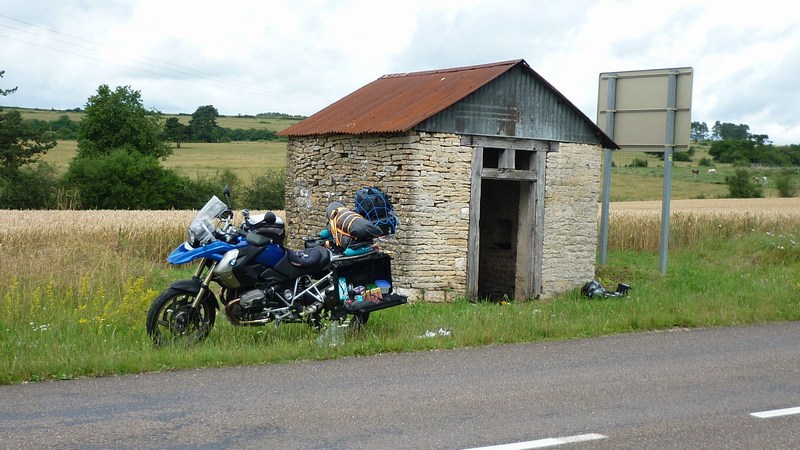