The light at the end of the tunnel , perhaps 100 metres or so beyond my point of entry, and then my exit on the other side.. 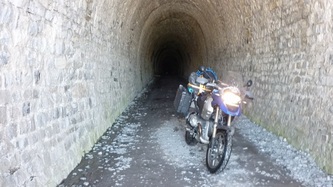 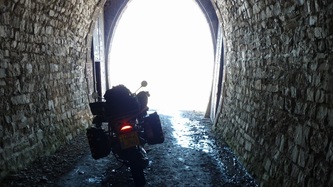 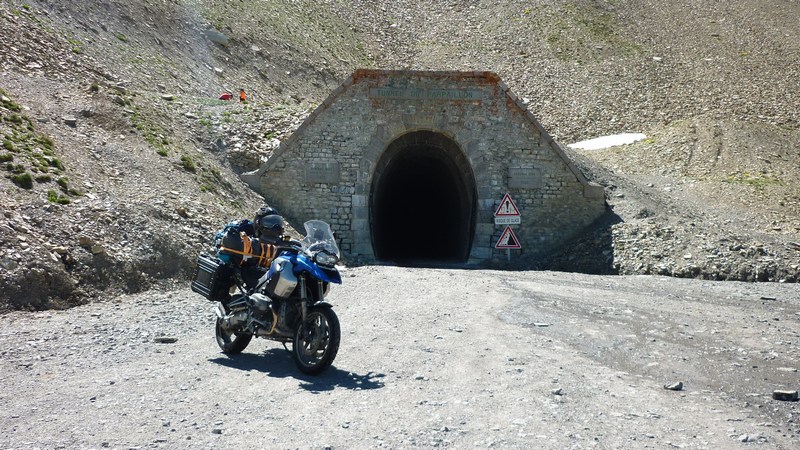 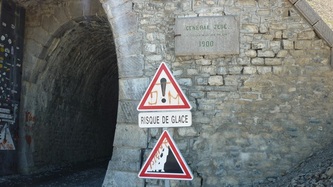 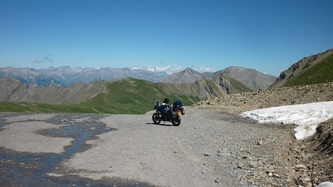 Regardless of the warning signs I would never have dreamt that ice so thick could carpet the tunnel to the extent it does , but there you go - the ice is very thick , very hard and won't move when you collide with it!

The tunnel offered a brief respite form the high temperatures , which despite being at such high altitude was still far warmer than that of the UK when I left.

The descent proved to be far easier than the ascent , though the two Germans considered it to be the equal. My guess is that they had never done the Parpaillon to Jausier route and were in for a surprise! Occasionally there would be the odd boulder that had found its way to a new resting place after perhaps giving in to gravity , or some other cause. 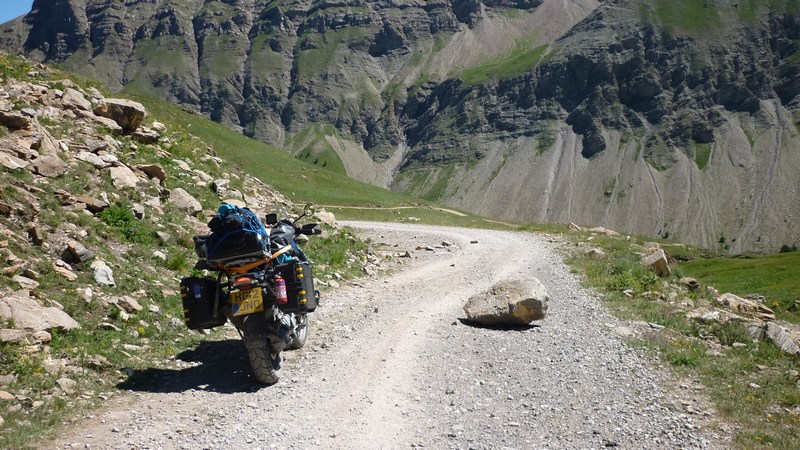 A fair way down the Crevoux/Embrun side the scenery and lay of the land was taking on a different leaning as I approached a nice green area for a top up of water and a light snack. I opened a fresh carton of fruit juice by piercing the foil with the supplied straw and moments later it started venting and quickly did its thing over my Hein Gericke trousers, thanks! 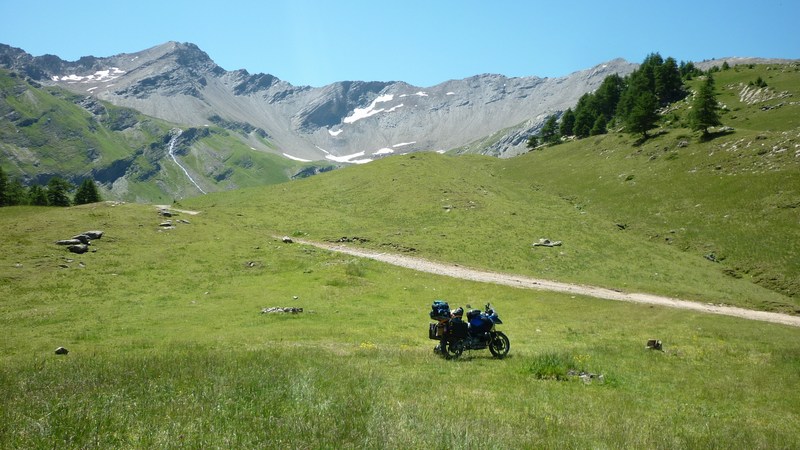 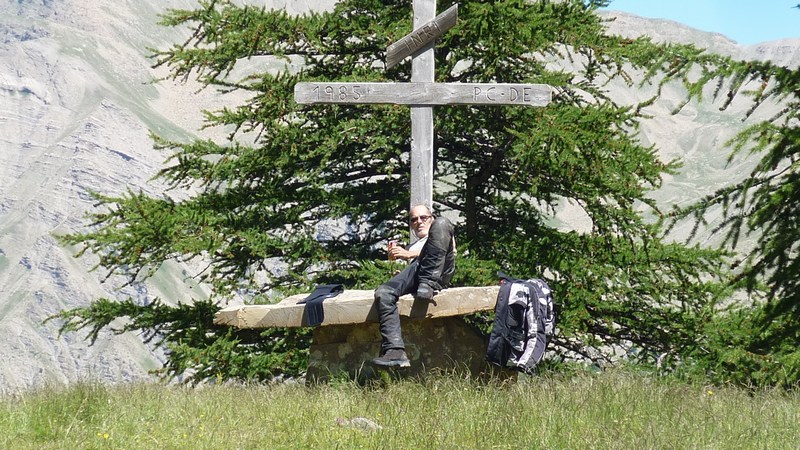 I took a look behind me at the track I would be continuing along and heard a couple of approaching riders before hitting the trail again myself. 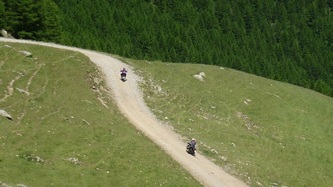 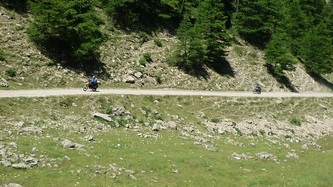 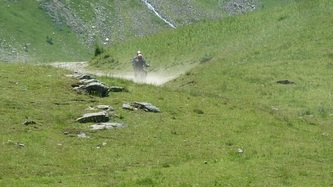 I finally reached a bridge at the end of this route where the gravel had now changed to a tarmac surface. In fact the trail does continue for another few kilometres or so to Crevoux en-route to Embrun but I’d had enough for one morning , was feeling tired,  hot and hungry, not to mention very thirsty. I took the road route onto Embrun by a winning vote of about 70% against the devil upon my shoulder! ;-)

The road from here to Crevoux/Embrun was a good smooth surface with fast sweeping bends that did wonders for rider air cooling!
I arrived in Embrun , a good sized town and not too busy. I pulled up at one of the first restaurants I clapped eyes on. Today would be a day for a mighty fine salad.

The orange juice didn’t last long and neither did the 1 litre bottle of water. The salad was a masterpiece but by the time I had eaten it all I had no room for the baguette cuts.
No way was that going to waste as I secretly placed them into my portable bread bin in the form of a Caberg Trip helmet and placed a dolloping of gloves over them before heading into town to purchase my much needed iPhone charger lead at the phone shop directly behind the restaurant. 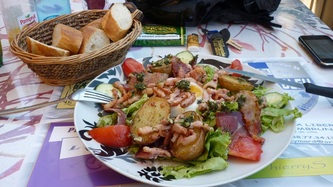 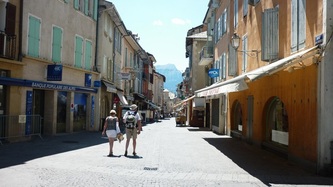 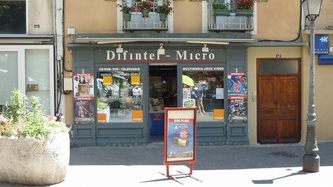 After my time in Embrun I picked up the route back toward Jausier with the intention of picking up the next route , Col de Bonnette and then toward Tende which lies north/east of Monaco on the map.

Fuel was running low so I decided to ride on through Jausier and back toward Barcelonnette before finding a service station. By the time I had ridden the 12km back to Jausier I concluded I was as good as to take up a second night at the free site I was at the night before. Had I known I would be doing this I could have tackled Col du la Parpaillon with a considerably lighter GS by leaving everything at camp.

Back at base my previous spot had been taken by a family but it wasn’t too long before I reclaimed ‘loggy’! I pitched up the Khyam and settled to see the rest of the afternoon and evening out by blogging rough notes to keep up to date. A coffee was on the go before my last meal, beans and the baguette cuts from Embrun , followed by a cup of tea and even more coffee before getting my head down for the night.

I hadn't done many miles on this day but I certainly felt worn out after the days events. It goes without saying that to do the Col du la Parpaillon route alone is risky business and really shouldn't be attempted without company if you're an off road novice, certainly not from the Jausier side , but who am I to take heed from? I chose to do it because it was there, and I did it alone because... I was alone!

Had the Germans not been at the tunnel then I'd like to think my approach would have been much different. Different in so much that I would have approached the tunnel entrance on foot and walk some way in before going in blind on the bike.

Lesson: ALWAYS check the way ahead on foot if in any doubt.

Ideally the route is suited to much smaller/lighter bikes , perhaps 450cc maximum , but in the real world we ride what we ride - some have several bikes and some have just the one bike. No bike has yet been designed that can undertake all situations better than any other bike , it's just the way it is , pays your money and take your choice.

I still can't believe how abruptly the ice slab had stopped me... 'thud' ... and down in an instant.

The bottle carriers had taken a bit of a bashing up the mountain and had broken in identical places. I remembered packing my soldering iron but stupidly no solder wire! I resorted to a campsite bodge with insulation tape. The adapted adaptor plate from my previously owned BMW F800GS was standing up to the travel perfectly. 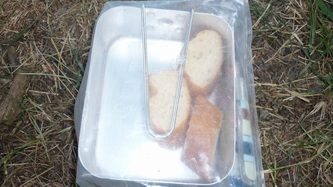 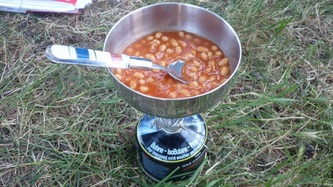 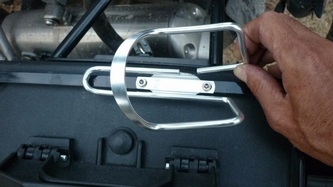 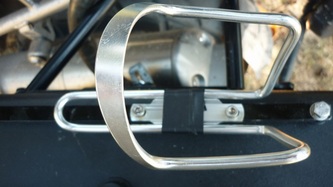 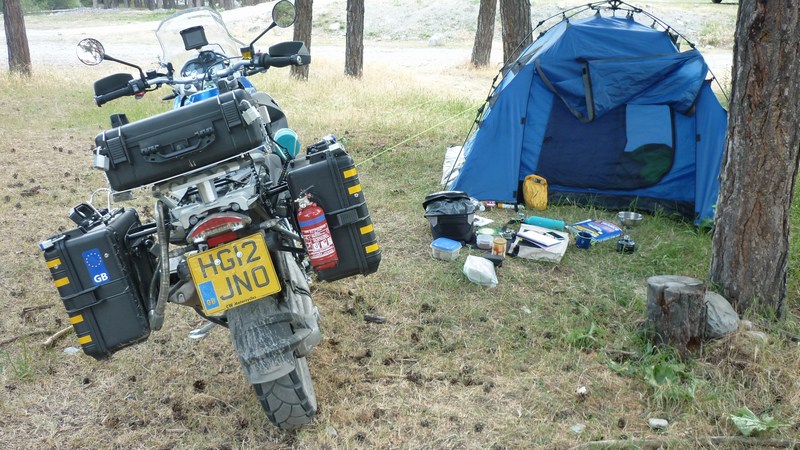 On the run down to Crevoux after the Parpaillon adventure I had a strange ringing in my ears unlike anything I had ever experienced before. I do on occasions suffer from ringing in the ears , a tinitus like sound , but nothing like this before. It was more like a morse-code with uneven dotted beeps that I could hear. An altitude thing maybe , either that or I am falling apart in the nogging department!

In the evening, amongst activities such as map reading and blogging, I did a check through the finances. It was decided that with just 180 Euros left I would not be able to continue any further south with my planned route but instead to start the long ride home via other POIs. These included Col de L’Iseran , Val d’Isere and of course Paris for my emergency passport. Though it was a disappointment ,  I was grateful to have seen what I’d seen, done what I’d done and experienced a fabulous adventure overall, only made possible by Jo after the initial loss of all my money and other valuable documents so early in the adventure.
Alps 2012 + 11