Having left Venice, I set off through Slovenia and onto Croatia, and not without issues!
My sat-nav was all out of routes after Italy and so it was back to map referencing. This, combined with poor road signage meant going around in circles for a good half hour.
Eventually I pulled up to study the map and a young girl turned up and sat opposite my van. She was dressed in what I call 'hippy' clothes, and so to me she was a hippy!
After asking her for directional assistance (she spoke some English, fortunately) I set off again ... with the hippy girl in my passenger seat! To cut a long story short, she was keen on the idea of travelling and agreed to go wherever I was going! I told 'hippy' I am travelling for thousands of miles - "I don't care..." , she replied!

It wasn't until we got to the Croatian border that she started to panic. Having no ID whatsoever, it was about to get messy, not to mention time consuming. Without wanting to apply labels to 'types', I felt good cause to ask her, long before we reached the border, whether or not she had any drugs about her person, any at all, and that I required the truth in her answer. "No, no drugs" was her reply.
At the border we are both asked for ID and I pass the test. Hippy told security she didn't have any ID and could we turn back. Not that easy, unfortunately! She was whisked away into the Police building. Some time later a guard came over to me and said he had found drugs on her and that they would need to get the 'sniffer dog' to rummage through my Transit. Brilliant... "I'll follow you with my camera..."! 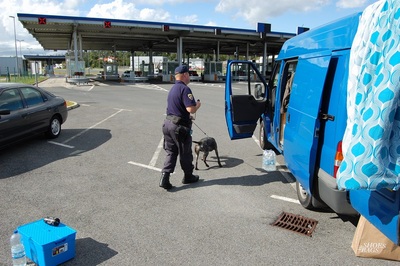 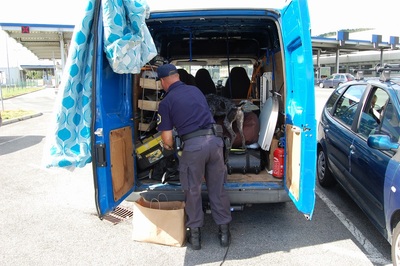 I had been delayed long enough for the thundery dark clouds, on approaching the Border Control, to totally clear to blue sky.
Having eventually got the all clear, 'Hippy' getting a fine to pay within 'x' days, the Border Control said I must "turn around and take the girl 10kms away, drop her off and come back if you want to pass Control".
It transpired that 'Hippy' also had a boyfriend and so after lending her my phone we agreed to meet her man at a fuel station, 10km back from the border. 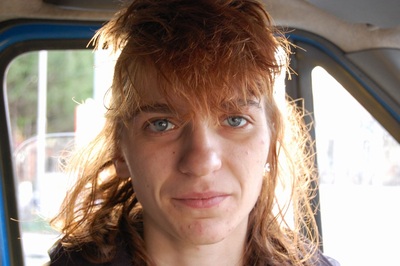 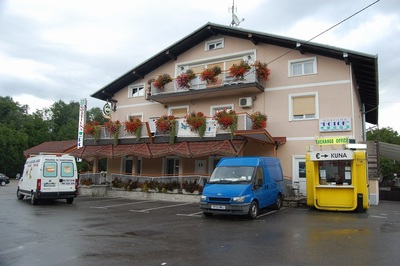 Hippy and I had a parting hug, a smile, and wished one another well!

I found myself a great hotel for the night, as it was drawing to the end of the day and would soon be dark after crossing the border into Croatia.

At last I was over the border and into Croatia. My route would be to cut through Croatia as direct as possible toward Split. I'm not sure really why I chose to take the shortest route but as it turned out, and despite being on the the equivalent to a UK motorway, progress was made at a good rate and with no traffic issues at all. The E61/A7 would turn out to be a very pleasant run, good scenery and a fast route to toward Split. 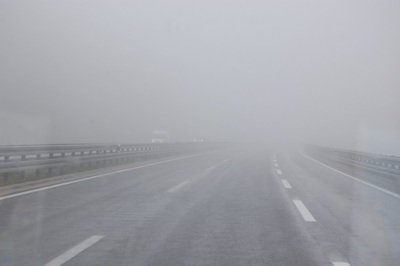 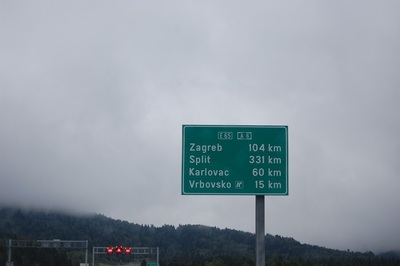 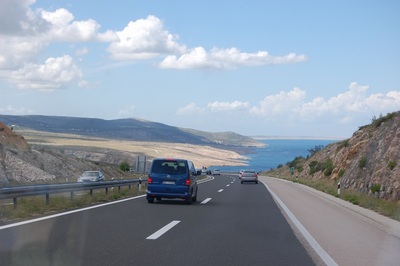 After a murky start into Croatia the weather would soon turn into yet another scorchingly hot day whereby the only comfortable way to drive would be to have both windows down and just a pair of shorts on, yes, leave them on this time! The sights over the sea after exiting yet another tunnel were nothing short of spectacular!
After only my second roadside stop since entering Croatia I would take time out to cool down, have a bite and a much needed coffee, before continuing on and moving more inland. 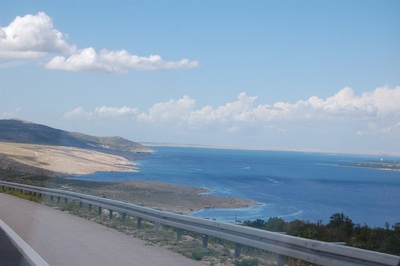 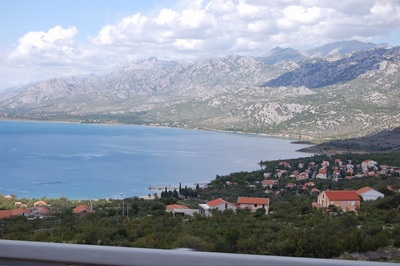 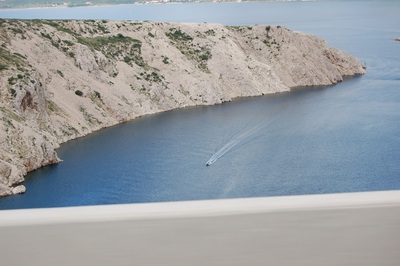 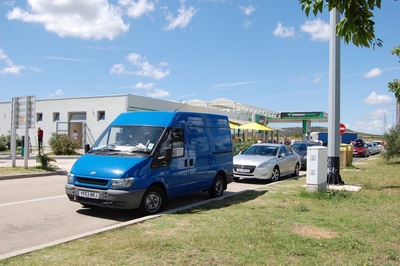 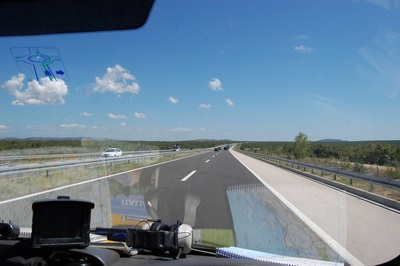 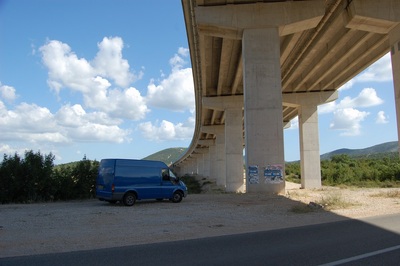 When 'Ave Maria' came on the radio I just had to pull up, beneath a bridge, and take in the moment of where I'd arrived on my unplanned route since selling my home in Dorset, England. The moment was sublime!

I took another short stop for refreshments, roadside, at the overlook of a railway track through the rocky landscape. I was, by now, consuming much water due to the intensity of the hot weather in Croatia. 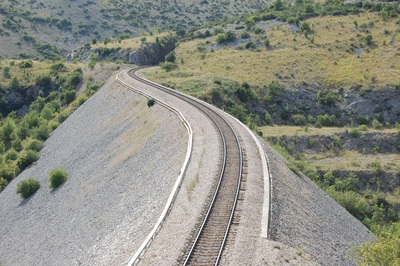 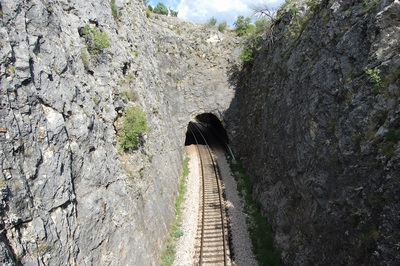 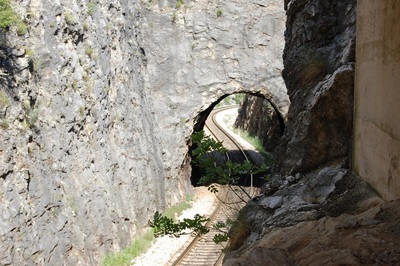 I had chosen to take the coastal route from Zadar to Split but it soon became clear that this would be far too slow due to the traffic load and tourist season. I steered toward a clearer run with a view to making Split my stopover point. Unfortunately, I wasn't particularly taken by Split, least of all it's heavy tourism appeal, and so after a brief while I set off again, in search of accommodation in a not quite so built up area, and at much lower cost than the accommodation I had previously looked at on the sea front.
Back on track with the coastal route, I headed at a very slow pace from Split to Podgora. There is no doubting this is a beautiful coastline, but again, vehicular congestion was in abundance. Even the locals on scooters weren't making that much progress!
The whistle-blowing dressed in white female traffic police did bring a smile to my face! 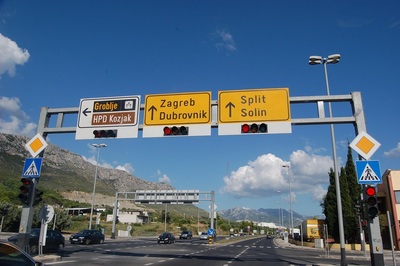 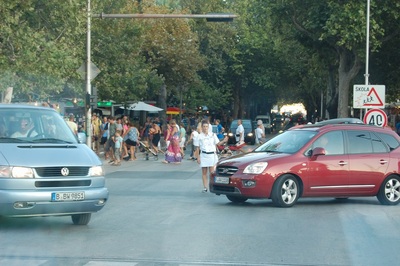 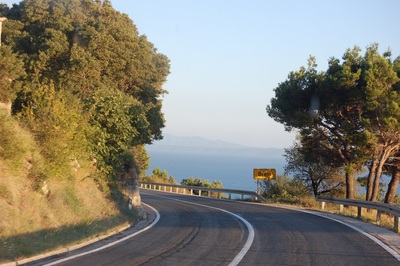 Dusk would be upon me very soon and so once again I headed away from the coast and onto the 512, Podgora toward Vrgorac, in the hope of finding a roof for the night. Failing that, it would be bedding down in the Transit, which didn't bode too well, if only due to the heat and desperately wanting a shower!

The 512 out of Podgora is a fabulous route, I just wished I were back on a motorcycle as I climbed the twisty mountain hugging route, whilst trying to take in the view over the coast. The 512 demands that your attention to the road is paid, in full, as any 'off' here would most likely result in being very human unfriendly!

I eventually arrived in Vrgorac! Nothing here to write home about other than I had found a bed, a beer, and a chance for a shower and rest, at last!
Bosnia & Herzegovina