After a few text exchanges with Jo the night before, I had sealed my decision proper - head back in a homeward direction. You can't win them all!
Although I couldn't complete the whole of my planned adventure and done all that I wanted to do, I had managed to achieve more than I felt able and seen more in one place than I could ever have hoped for, and wild camped alone, something I have never done before.

I rise at 07:30hrs , a bit more of a lie in than previous days and nobody else on site was awake , or if they were there were certainly no signs of life. I put on a brew and remember I have one last piece of the baguette left - it gets toasted on the burner.

It was very tranquil here , 'cept for the permanent running of a generator in a large building 50 metres or so away, which I guessed was in some way linked to the filtration system for the river. Birds could be heard all around as well as the occasional vehicle on the road some 200 metres from me.

I sipped some more coffee whilst sitting on 'loggy'. Loggy and I had become friends for the short while we were together, if that were at all possible, but we would be parting company very soon - for good! Somebody else would have bragging rights to loggy another day.

Immediately ahead of me , direction Barcelonnette, was rough and rugged land and the river. Behind that , rising hills full with trees, and beyond the trees the mountains. To my right, much the same, but with a widening of the river. To my left was the continuation of the camp, the generator, more industrial land and buildings and then the mountains. Behind me and through the sheltering of trees the rising sun with a slight haze partially obscuring the mountains it was steadily climbing over. The land all around was lying beneath yet another beautifully blue sky. It would be another hot one!
Whilst Val d'Isere was only a pencilled possibly it was by no means a definite course of action. No, I wasn't 100% which way I'd head home - I still wanted to ride the Furkhapass in Switzerland after missing it on last years tour. Perhaps I should head for Bardonecchia then decide , Annecy, Val d'Isere or Furkhapass.
I had fond memories of Val d'Isere from 2009 when Jo and I took part in a Land Rover rally through the Alps and Pyrenees.

For certain though I would be heading back along the D902 - Route des Grande Alps through Col de Vars, Guillestre, Arvieux and Cervieres.
Despite the fresh morning there is no dew, the bike is totally dry and it wasn't even 08:00hrs. I walked to the river for my morning freshen up before pitching up and moving out.
I set off at 08:30hrs toward Col de Vars. I remembered seeing a Spar at Vars on my way in from Embrun the day before and so with that in mind I would make my first stop for some provisions.

My route took me back past the small town of Parpaillon so I took a couple more pictures for the memory. 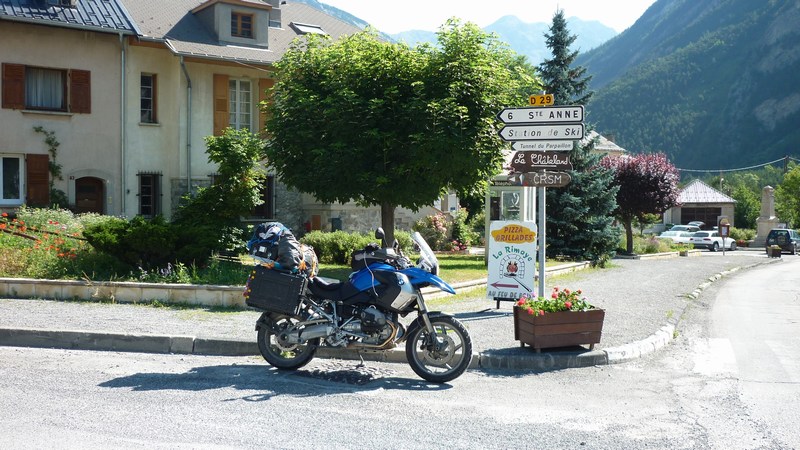 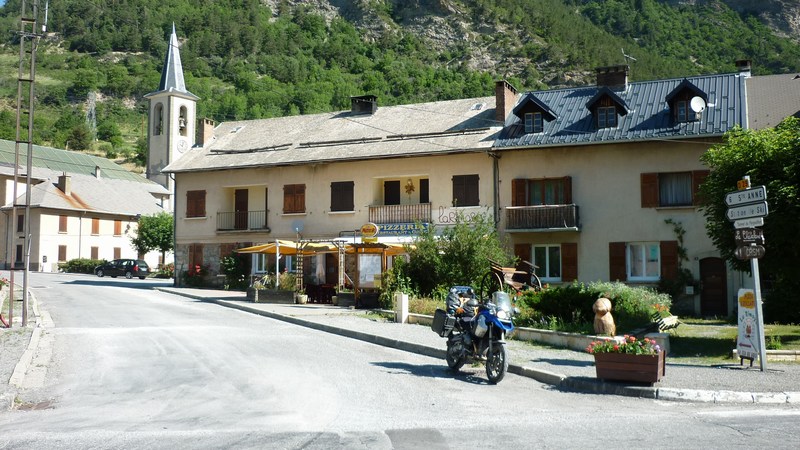 The D902 to Vars was possibly the worst road surface I had travelled since crossing the channel, in places anyway. It smoothed out after several kilometres up the winding Pass to the Ski resort itself.
The Sat-Nav picked up an alternative route along the D431 , which in fact only detoured off the D902 for a short distance, but I rode this short section anyway. 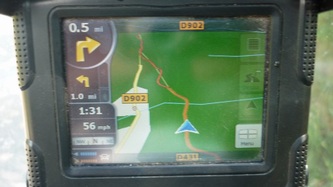 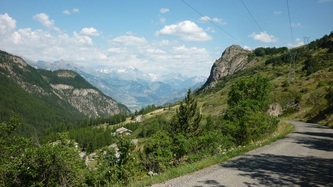 On the descent whilst exiting Vars I pulled into a very pleasant looking roadside picnic area with stunning views of the mountain-scape ahead. Once again, it was becoming extremely hot and now was as good a time as any for a bite to eat and some hydration fluid. 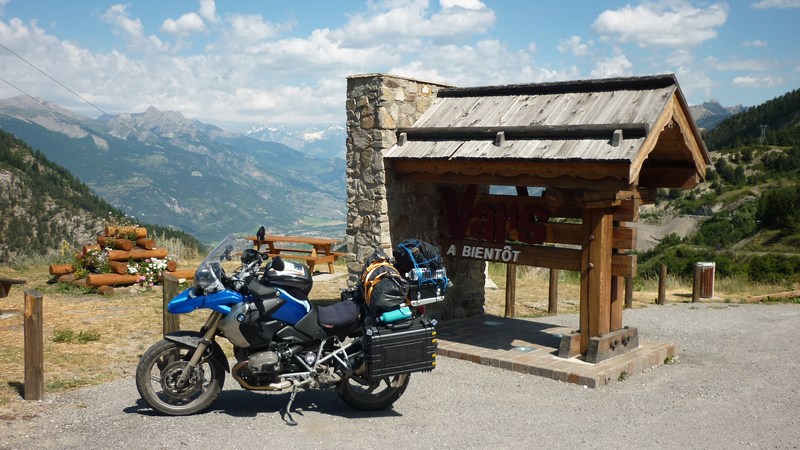 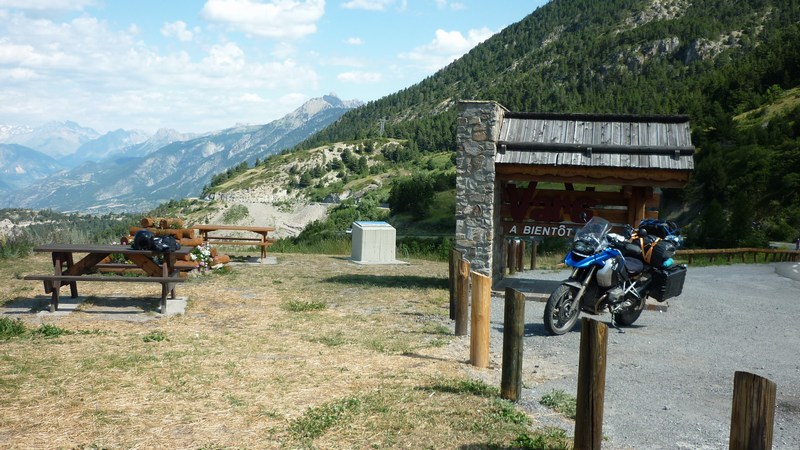 What better than cheese in a soft centred crusty baguette?

Courtesy of Spar at Vars.

1 Baguette.
1 pack of 8 slices of cheese.
1 tub of cheapskate brand margarine (yuk) which would prove to be a poor purchase in time!
2 x 1.5ltrs of Eau de Source Naturelle Cristaline Water ( secured on the bike)

All in, it made for a very welcoming snack to keep me going until the next food intake.

I remounted up after a short break and continued the drop down the D902 heading towards Guillestre , through Cervieres and onto Briancon.
An interesting road beneath me caught my eye as I rode the overhead carriageway toward Arvieux. I turned back a kilometre or so and took the lower road. 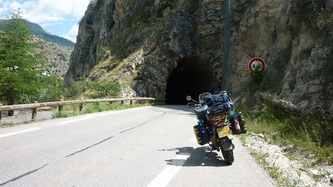 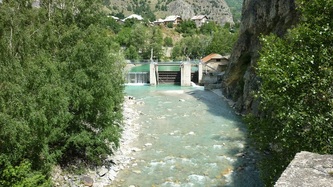 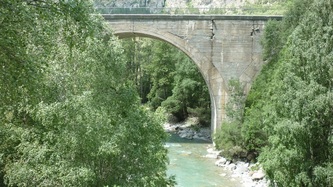 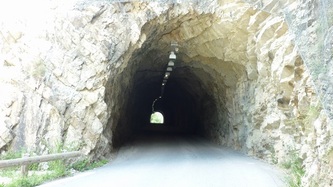 Along the N94 and just after La Besse Haute heading north I came across this giant of a man! 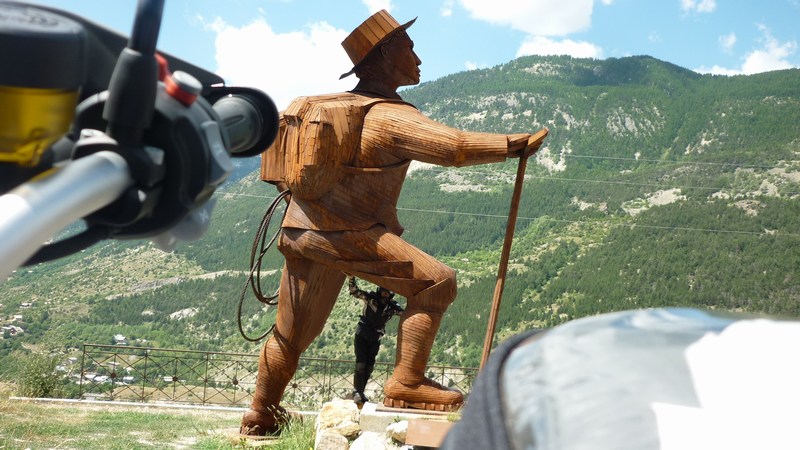 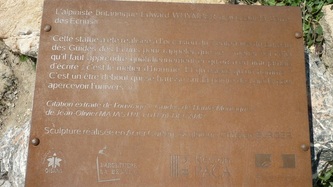 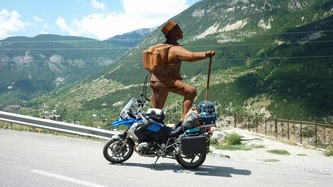 Stoppages were now becoming far and few between in an attempt to clear good ground for my date with Paris and the passport issuing Consulate. I made my way through Briancon without calling in to the town but just a couple of quick snaps on the way out of Briancon. 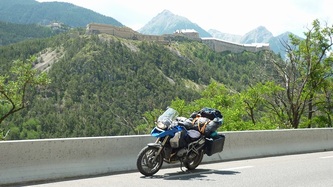 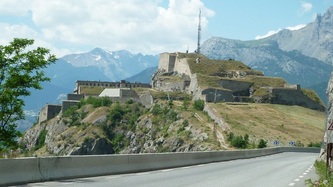 Ideally I wanted to reach Susa , or close to , for my next campsite. Not because I knew anything about Susa but because I estimated it to be at a distance that would mean I'd put in a good run for the day and rest would be a wise move by the time I got there.
From Briancon I headed toward Oulx with the intention of peeling off toward Sestriere.
ALPS 2012 + 12